TUSCALOOSA | A copy of the Quran dating from 1853, its spine missing, its pages browning and its front cover 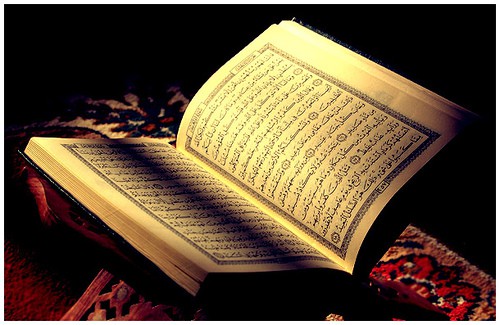 We, Ourselves, have sent down the Dhikr (the Qur’an), and We are there to protect it.

almost detached, sits today in a library at the University of Alabama.

While Islam’s holy book now appears safe from a Florida pastor’s plan for a bonfire, the Quran at UA had its own dramatic rescue from the flames. It was the only book saved from burning of the university library at the hands of Union troops in 1865.

“We don’t know who chose it, why they chose it or how it got back to the university. All we know is that for a long, long time, we’ve had this book,” said Clark Center, W.S. Hoole Special Collections Library curator.

The order to burn the University of Alabama had been given long before federal troops arrived in Tuscaloosa on April 3, 1865. They believed that

the university, along with a

On the morning of April 4, 200 Union soldiers led by Col. Thomas M. Johnston approached the center of campus, the Rotunda, which held the university’s collection of books and natural history.

As the troops marched down the long, gravel street lined with cedar trees, they were met by a group of university faculty that included Andre Deloffre, the university’s librarian, and William Wyman, professor of Latin and Greek.

Deloffre begged Johnston to spare the library, one of the finest of its time. Johnston responded by sending a courier to headquarters, asking if the library could remain unscathed, but he was instructed by his general to burn the Rotunda as planned.

According to Center, what happened next has become part of University of Alabama lore. Legend has it that before Union troops set the building on fire, either Johnston, one of his aides, Deloffre or someone else went into the Rotunda to save one book — a copy of “The Koran: Commonly Called The Alcoran Of Mohammed.”

Staff file photo
This copy of the Quran was saved from the 1853 burning of the UA campus. The book is housed in the William S. Hoole Special Collections Library.

The book was an English translation of the Quran and had been published in Philadelphia in 1853. Soon after it was removed from the library, the building, along with much of the rest of campus, was engulfed in flames.

“Maybe he took it home and sent it back, maybe he went in, chose something and handed it to the librarian,” Center said. “I think, for a long time, the story was just verbal; it was just accepted that the book was here. The first time I’d seen it in writing was 1931 in the Centennial issue of The Crimson White. ”

Center said that he had no doubt the book was an original from the Rotunda and that it had probably been purchased by the library to help them cover the topic of religion as broadly as possible, since the university’s students had never been exposed to the Quran before.

“The stamps inside of it are consistent to those from other pre-Civil War books. It had definitely been here since before the war,” he said. “Religion was a big part of life back then. Most of the university’s students were Methodists, Baptists, Presbyterians and even Catholics, and most had never seen something like that.”

“It shows that the university, in the antebellum period, was attempting to give its students a broad education to enable them to learn points of view that were not necessarily their own,” he said.