What Tunisia Means to the Arab World 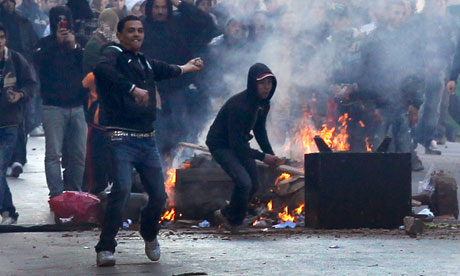 The grievances that the Tunisian demonstrators have articulated in recent weeks - and in other forms in recent decades - are also widely shared across the entire Arab world, notes Rami G. Khouri.

President Zein el-Abedeen Ben Ali fleeing the country may prove to be the historic turning point that many in the Arab world have been predicting and anticipating for decades: the point at which disgruntled and often humiliated Arab citizens shed their fear and confront their leaders with demands for serious changes in how their countries are governed. The overthrow of Ben Ali by fearless citizens who were no longer intimidated by their police and army is historically significant because of four main reasons:

1. This is the first example in the past generation of an Arab leader and his system being overthrown by popular action. It marks the end of acquiescence and docility among masses of ordinary Arab citizens who had remained remarkably complacent for decades in the face of the mounting power of Western-backed Arab security states and police- and army-based ruling regimes. Tunis today may well go down in history as the Arab equivalent of the Solidarity movement in the Gdansk shipyard in Poland in 1980 that sparked wider protests that a decade later ultimately led to the collapse of the Soviet Union and its empire. (In fairness, the Sudanese people probably should be credited with the first modern popular protest that changed their leadership, when protracted street demonstrations overthrew President Jaafar Numeiry in 1985 -- though that change did not last and Sudan soon after found itself under military rule once again).

2. The grievances that the Tunisian demonstrators have articulated in recent weeks -- and in other forms in recent decades -- are also widely shared across the entire Arab world, with the possible exception of some of the smaller wealthy countries in the Gulf. These complaints are about rising prices and job shortages, but also about the heavy-handed and condescending manner in which ruling Arab elites treat their citizens and deny them the most basic human rights of expression, credible representation, political participation, holding power accountable, and equitable access to the resources of the state and the opportunities of the free market.

3. The coverage of the fast-moving developments and the overthrow of the Ben Ali regime on Jazeera television brings this process into the living rooms of hundreds of millions of Arabs, many of whom have been captivated with the media coverage, making it likely that some of them may want to launch their own protests in other Arab countries. This marks the maturity of Jazeera television as a political force that can play a role in changing political orders, following its development in the past 15 years, since its birth in 1996 as largely an instrument of emotional expression and solidarity for Arab viewers who were frustrated by their inability to practice their full citizenship.

4. The most remarkable thing about what has just happened in Tunisia is how thin and narrow was the support structure that held Ben Ali’s security-based regime in power. We learn once again that dictators maintained in place largely by soldiers and intelligence services crumble swiftly once their citizens show that they are not afraid to confront the soldiers, and, indeed, risk death, beatings and imprisonment when they do so. Once Ben Ali Monday ordered his troops not to use live ammunition in confronting the demonstrators and pledged not to run for office again in 2014, his days in power were over. It only took another 24 hours for him to flee the country.

Ben Ali was one of the most glaring examples of the modern Arab autocrat who was also heavily supported by Western powers, and who ruthlessly put down protests and challenges by domestic forces, whether Islamists, secular democrats, leftists, or union members, jurists, journalists and other specialized groups. Because his system of rule and the grievances that finally sparked his people to throw him out are both so common around the Arab world, we may be witnessing the start of a historic process in which developments in Tunis ignite copycat protests or milder political challenges in other Arab countries. The Jazeera television effect will play a huge role here.

A major unknown is what the overthrow of Ben Ali will mean for the interests and postures of major Western powers, like France and the United States. This will depend largely on what kind of governance system replaces his security state, whether a democratic and pluralistic system takes root, and how much the Tunisian people will hold Western powers responsible for their decades of suffering in their dehumanized condition as politically castrated semi-citizens. We shall soon find out, because for the first time in half a century we may have an opportunity to learn what the citizens of Tunisia actually feel and want.

Rami G. Khouri is Editor-at-large of The Daily Star, and Director of the Issam Fares Institute for Public Policy and International Affairs at the American University of Beirut, in Beirut, Lebanon.