No Security Firms for African Refugees: Opportunities and War in Mali

The British security firm G4S is set to rake in massive profits thanks to crises in Mali, Libya and Algeria. Recognized 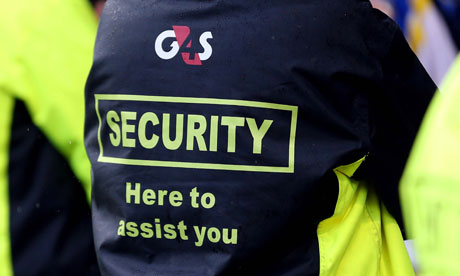 As France, the US and EU countries determine the future of Mali through military efforts and political roadmaps, the country itself is so weakened and politically disfigured beyond any possibility of confronting outside designs, writes Ramzy Baroud.

as the world’s biggest security firm, the group’s brand plummeted during the London Olympics last year due to its failure to satisfy conditions of a government contract. But with growing unrest in North and West Africa, G4S is expected to make a speedy recovery.

The January 16th hostage crisis at Algeria’s AinAmenas gas plant, where 38 hostages were killed, ushered in the return of al-Qaeda not as extremists on the run, but as well-prepared militants with the ability to strike deeply into enemy territories and cause serious damage. For G4S and other security firms, this also translates into growing demands. “The British group (..)is seeing a rise in work ranging from electronic surveillance to protecting travelers,” the company’s regional president for Africa told Reuters. “Demand has been very high across Africa,” Andy Baker said. “The nature of our business is such that in high-risk environments the need for our services increases.”

If Algeria’s deadly encounter with al-Qaeda was enough to add then north African country to private security companies emerging African market, Libya must be a private security firm paradise. Following NATO’s toppling of the regime of Libyan leader Muammar Gaddafi and his brutal assassination in Sirte on October 20, 2011, numerous militias sprung up throughout Libya, some armed with heavy weapons, courtesy of western countries. Initially, such disturbing scenes of armed militias setting up checkpoints at every corner were dismissed as an inevitable post-revolution reality. However, when westerners became targets themselves, ‘security’ in Libya finally became high on the agenda.

Many private security firms already operate in Libya; some were even present in the country before the former Libyan government was officially overthrown. Some of these firms were virtually unknown before the war, including a small private British firm, Blue Mountain Group. The latter was responsible for guarding the US diplomatic mission in Benghazi, which was torched on Sep 11 last year. It later emerged that the attack on the embassy was preplanned and well-coordinated, resulting in the death of four Americans, including Ambassador J. Christopher Stevens. It remains unclear why the State Department opted to hire Blue Mountain Group, as opposed to a larger security firm as is usually the case with other western embassies and large companies that now vie to reconstruct the very country that their governments conspired to destroy.

The lucrative business of destroying, rebuilding and securing has been witnessed in other wars and conflicts spurred on by western interventions. Private security firms are the middlemen that keep local irritants from getting in the way of post-war ‘diplomacy’ and the work business giants.

When a country eventually collapses under the pressure of bunker busters and other advanced weapons, security firms move in to secure the realm as western diplomats start their bargaining with the emerging local elites over the future of the country’s wealth. In Libya, those who contributed the biggest guns were the ones that received the largest contracts. Of course, while the destroyed country is being robbed blind, it is the local population that suffers the consequences of having brute foreigners with guns watching their neighborhoods in the name of security.

It must be said that the new Libyan government has specifically rejected Blackwater-style armed contractors – as in having boots on the ground – fearing provocations similar to those that occurred in Baghdad’s Nisour Square and similar killing throughout Afghanistan. The aim in Libya is to allow smooth business transactions without occasional protests provoked by trigger-happy foreigners. But considering the deteriorating security in Libya which has been created by the systematic destruction of the central government and its entire military apparatus, a solution to the security vacuum remains a major topic of discussion.

Private security firms are essentially mercenaries who offer services to spare western governments the political cost of incurring too many casualties. While they are often based in western cities, many of their employees come from so-called Third World countries. For all involved, it’s much safer this way, for when Asian, African or Arab security personnel are wounded or killed on duty, the matter tends to register, if ever, as a mere news item, with little political consequence, Senate hearings or government enquiries.

Mali, a west African country that is suffering multiple crises – military coups, civil war, famine and finally an all-out French-led war – is the likely next victim or opportunity for the deadly trio: western governments, large corporations and of course, private security firms.

In fact, Mali is the perfect ground for such opportunists, who will spare no effort to exploit its massive economic potential and strategic location. For years, the west African country has fallen under political and military western influences. The year 2012 represented a text-book scenario that ultimately and predictably lead to western intervention that finally took place on January 11, when France launched a military operation supposedly aimed at ousting armed Islamic extremists. The military operations will last “as long as necessary,” declared French President Francois Hollande, echoing the same logic of the Bush administration when it first declared its ‘war on terror.’

But as inviting as the Malian setting may seem, it is equally intricate and unpredictable. No linear timeline can possibly unravel in simple terms the crisis at hand. However, all arrows point to large caches of weapons that made their way from Libya to Mali following the NATO war. A new balance of power took hold, empowering the ever-oppressed Tuareg and flooding the country with desert-hardened militants belonging to various Islamic groups. Two symmetrical lines of upheavals developed at the same time in both the north and south parts of the country. On one hand, Tuareg’s National Movement for the Liberation of Azawad (MNLA) declared independence in the north and was quickly joined by Ansar Dine, Al-Qaida in the Islamic Maghreb (AQIM) and the Movement for Oneness and Jihad in West Africa (MOJWA). On the other hand, US-trained army captain AmadouHaya Sanogo made his move in the southern part of the country in March, overthrowing President AmadouToumaniTouré.

The Malian storyline developed so rapidly, giving the impression that there was no other option but imminent confrontation between the south and the north. France, Mali’s old colonial master, was quick to wave the military card and worked diligently to enlist west African countries in its war efforts. The plan was for the intervention to appear as if it’s purely an African effort, with mere logistical support and political backing by their western benefactors. Indeed, on Dec 21, the UN Security Council approved the sending in of an African-led force (of 3,000 soldiers) from the Economic Community of West African States (ECOWAS) to chase after northern militants in the vast Malian desert.

That war was scheduled for Sep. 2013, however, to allow France to form a united western front and to train fragmented Malian forces. But the militants’ capture of the town of Konna, close to the capital Bamako, has reportedly forced France’s hand to intervene in Mali and without UN consent. The war which was waged in the name of human rights and Mali’s territorial integrity, has already sparked outcries from major human rights organizations regarding crimes committed by foreign forces and their Malian army partners. However, what seems thus far as an easy French conquest has left other western powers licking their chops over the potential of having access to Mali, which is unlikely to have a strong central government anytime soon.

On Jan 25, the African Press Agency's page on Mali was filled with news items about eager western involvement in solidarity with the French war buildup. It ranged from “Italy to send aircraft to help transport troops to Mali” to “Germany pledge aid to Africa for Mali intervention.” All calls for political dialogue, especially as ethnic strife is likely to devastate the country for years to come, seem to fall on deaf ears. Meanwhile, according to APA, the UK is offering help to Mali in finding a ‘political roadmap’ aimed at security the ‘political future of the West African country.’

As France, the US and EU countries determine the future of Mali through military efforts and political roadmaps, the country itself is so weakened and politically disfigured beyond any possibility of confronting outside designs. For G4S and other security firms, Mali now tops the list in Africa’s emerging security market. Nigeria and Kenya follow closely, with possibilities emerging elsewhere.

From Libya to Mali a typical story is forming, coupled with lucrative contracts and massive opportunities of all sorts. When private security firms speak of an emerging market in Africa, one is to safely assume that the continent is once more falling prey to growing military ambitions and unfair business conduct. While G4S is likely to polish its tarnished brand, hundreds of thousands of African refugees (800,000 in Mali alone) will continue their endless journeys into unfamiliar borders and unforgiving deserts. Their security matters to no one, for private security firms have no room for penniless refugees.

Ramzy Baroud (www.ramzybaroud.net) is an internationally-syndicated columnist and the editor of PalestineChronicle.com. His latest book is: My Father was A Freedom Fighter: Gaza's Untold Story (Pluto Press).