The role of Africa and Africans in Islam

A late Ghanaian-American scholar, Imam Alpha-Him Jobe, once noted that not 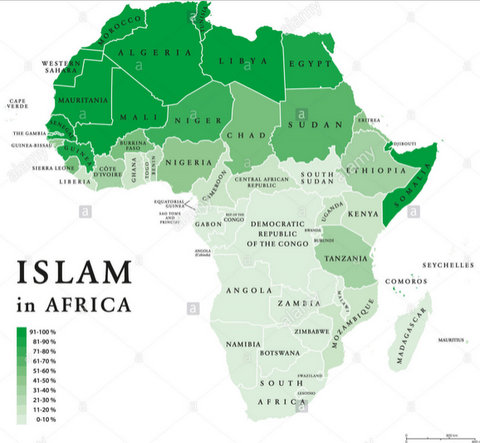 enough is emphasized about how Islam came to Africa peacefully.For all of the politically expedient talk of Islam being “spread by the sword” that has permeated discussion of Islamic history in Western circles for centuries, its peaceful entry into Africa has largely been ignored, perhaps on purpose.Indeed Africa, specifically Habasha or modern-day Ethiopia, was where Muslims first found a haven from torture and persecution in Mecca. It was where a Christian king welcomed them and guaranteed them safety and protection when they were turned out of their homes in Arabia. This was even after their Meccan enemies tried to directly intervene and bribe the leader to return them to their homeland.Muslims are indebted to this king, Najashi. And we are indebted to Habasha.But that is not the only role Africa plays in the history and present of Islam and Muslims. Today, 47 percent of Africans are Muslims, accounting for one-quarter of the world’s Muslim population. But from the start of Prophet Muhammad’s mission, Africans have been part of building and establishing Islam. May God’s peace and blessings be upon the Prophet.The most well-known personage is Bilal ibn Rabah, may God be pleased with him. This beloved Companion of the Prophet was a freed slave who was renowned for his tremendous faith through torture and severe persecution. He was also the first caller to the five daily prayers (Mu’addhin). For centuries, his commitment to Islam has been shared in history books, stories, songs, and poetry. Most recently, his story has been brought to movie theaters across the United States, in a cartoon inspired by his life entitled “Bilal: A New Breed of Hero”.But even before Bilal, there was Umm Ayman or Barakah, may God be pleased with her. The Prophet once said, she is his "mother after my own mother. She is the rest of my family."A former Abyssinian slave, she was the first person to hold him in her arms when he was born and the only person who knew him from that point until his death. She was one of the few Muslims who the Prophet assured of a place in Paradise.But these are only two of the more well-known figures. Throughout Islamic history, and today, Muslims from all around the world have made their mark. Mansa Musa of Mali was among the most famous from Africa after the Prophet’s time. However, there were many, many more accomplished Muslims, from scholars like Uthman dan Fodio of Senegal to artists to warriors like the Hausa princess Amina of northwest Nigeria.In America, we have the legacies of great Black Muslims whose ancestors hailed from different parts of Africa. Malcolm X, Imam Warith Deen Muhammad, and Muhammad Ali are among just a few. We also know of those who were brought here through kidnapping and slavery, like Omar bin Said and Abdul Rahman Ibrahim Ibn Sori. Despite incredible odds, they retained their faith.We hope this Black History Month will be the start of integrating learning about great Muslims from all parts of Africa in our full-time and weekend Islamic schools, as well as our bedtime stories and school projects for our children.And please don’t forget our book for Radio Islams Book Club, A Novel Idea. It is Servants of Allah by Sylviane Diouf, which presents a history of Black Muslims and how they kept a tight grip on their Islamic faith, identity, and teaching during slavery. Their struggle allowed for the introduction and preservation of Islam on this continent. Please read along with us, and join us, on the last Friday of February, to discuss the book live on Radio Islam.With Peace,The Sound Vision Team

The haven of the first Hijra (migration) | SoundVision.com
For Muslims, Ethiopia is synonymous with freedom from persecution and emancipation from fear.
soundvision.com

Umm Ayman, Barakah, may Allah be pleased with her | SoundVision.com
A Notable Muslim African Woman, who was like a mother to Prophet Muhammad, peace be upon him
soundvision.com