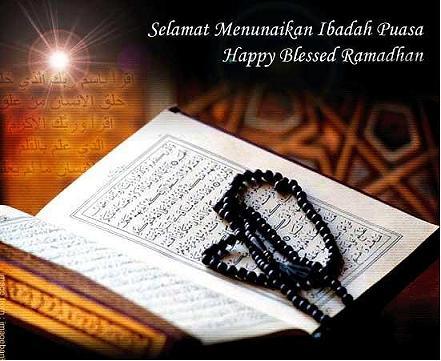 (Bangla)) is the ninth month of the Islamic calendar. It lasts 29 to 30 days. It is the Islamic month of fasting, in which participating Muslims refrain from eating and drinking [1] Fasting is intended to teach Muslims about patience, humility, and spirituality. It is a time for Muslims to fast for the sake of God (Arabic: الله‎, trans: Allah) and to offer more prayer than usual. As compared to the solar calendar, the dates of Ramadan vary, moving backwards about eleven days each year depending on the moon, thus, a person will have fasted every day of the calender year in 34 years' time. Muslims believe Ramadan to be an auspicious month for the revelations of God to humankind, being the month in which the first verses of the Qur'an were revealed to the Islamic prophet, Muhammad.

The name "Ramadan" had been the name of the ninth month in Arabian culture long before the arrival of Islam; the word itself derived from an Arabic root rmḍ, as in words like "ramiḍa" or "ar-ramaḍ" denoting intense heat,[2] scorched ground and shortness of rations. In the Qur'an, God proclaims that "fasting has been written down (as obligatory) upon you, as it was upon those before you". According to the earliest hadith, this refers to the Jewish practice of fasting on Yom Kippur. Khadeir.[3][4]

The Beginning of Ramadan

There are many disagreements each year however on when Ramadan starts. This stems from the tradition to sight the moon with the naked eye and as such there are differences for countries on opposite sides of the globe.[6] More recently however, some Muslims are leaning towards using astronomical calculations to avoid this confusion.

The month of Ramadan is the one in which the Qur'an was sent down - right Guidance to mankind, and clear signs of Guidance and Distinction of truth from falsehood. Those among you who witness it, let him fast therein. Whoever is sick or on a journey, then a number of other days. God desires ease for you, and desires not hardship. Thus may you fulfil the number of days assigned, magnify God for having guided you, and perhaps you will be thankful.

Ramadan is a time of reflecting, believing and worshiping God. Muslims are expected to put more effort into following the teachings of Islam and to avoid obscene and irreligious sights and sounds. Sexual intercourse is allowed after you have ended your fast, while during fasting it is prohibited because God does not require you to stop eating and drinking, you are required to resist all temptation while you are fasting.[8] Purity of both thoughts and actions is important. The act of fasting is said to redirect the heart away from worldly activities, its purpose being to cleanse the inner soul and free it from harm. It also teaches Muslims to practice self-discipline, self-control,[9] sacrifice, and empathy for those who are less fortunate; thus encouraging actions of generosity and charity (Zakat).[10]

Muslims should start observing the fasting ritual upon reaching the age of puberty, so long as they are healthy, sane and have no disabilities or illnesses. The elderly, the chronically ill, and the mentally ill are exempt from fasting, although the first two groups must endeavor to feed the poor in place of their missed fasting. Also exempt are pregnant women if they believe it would be harmful to them or the unborn baby, women during the period of their menstruation, and women nursing their newborns. A difference of opinion exists among Islamic scholars as to whether this last group must make up the days they miss at a later date, or feed poor people as a recompense for days missed.[11] While fasting is not considered compulsory in childhood, many children endeavour to complete as many fasts as possible as practice for later life. Lastly, those traveling (musaafir) are exempt, but must make up the days they miss.[12] More specifically, Twelver Shī‘ah define those who travel more than 14 mi (23 km) in a day as exempt.[10]

Prayer and reading of the Qur'an

Ramadan is also a time when Muslims are to slow down from worldly affairs and focus on self-reformation, spiritual cleansing and enlightenment; this is to establish a link between themselves and God through prayer, supplication, charity, good deeds, kindness and helping others. Since it is a festival of giving and sharing, Muslims prepare special foods and buy gifts for their family and friends and for giving to the poor and needy who cannot afford it; this can involve buying new clothes, shoes and other items of need. There is also a social aspect involving the preparation of special foods and inviting people for Iftar. Iftar in Sultan Ahmed Mosque in Is Istanbul,Turkey

In many Muslim and non-Muslim countries with large Muslim populations, the faithful will abstain from food from dawn to sunset. At sunset, the family will gather the fast-breaking meal known as Iftar. The meal starts with the ritual eating of a date — just as Prophet Muhammad was believed to have done. Then it's time for a prayer to thank God followed by the meal. In many homes, this is a simple meal of fruits and vegetables along with traditional Middle Eastern fare.[13]

Over time, Iftar has grown into banquet festivals. This is a time of fellowship with families, friends and surrounding communities, but may also occupy larger spaces at mosques or banquet halls, where a hundred or more may gather at a time.[14]

Most markets close down during evening prayers and the Iftar meal, but then re-open and stay open for a good part of the night. Muslims can be seen shopping, eating, spending time with their friends and family during the evening hours. In many Middle Eastern countries, this can last late into the evening, to early morning. However, if they try to attend to business as usual, it can become a time of personal trials, fasting without coffee or water.

Charity is very important in Islam. When walking down the streets of Cairo in Egypt at the time of the sunset prayer (Maghrib), not only people who are giving out dates and water are seen but several Mawaed Rahman as well. Mawaed Rahman are free public eateries organized during the holy month of Ramadan. Mawaed Rahman are organized by the wealthy, in order to offer the needy and the poor a warm meal during iftar time. Normally, Mawaed Rahman are donated and financed by individuals. The location of the Mawaed Rahman are essential, since areas where a lot of people pass by are preferred, because that way the eateries can reach out to a greater amount of hungry. One of the factors which hinders individuals to host such eateries is the long bureaucratic work.[15]

Sometimes referred to as "the night of decree or measures", Laylat al-Qadr is considered the most holy night of the year.[16] Muslims believe that Laylat al-Qadr is the night in which the Qur'an was first revealed to the Prophet Muhammad. Also, it is believed to have occurred on an odd-numbered night during the last 10 days of Ramadan, either the night of the 21st, 23rd, 25th, 27th or 29th. Shiites also commemorate the attack on Imam `Ali ibn Abi Talib and his subsequent martyrdom every year on the 19th, 21st and 23rd of Ramadan.

The holiday of Eid ul-Fitr (Arabic: عيد الفطر‎) marks the end of the fasting period of Ramadan and the first day of the following month, after another new moon has been sighted. The Eid falls after 29 or 30 days of fasting, per the lunar sighting. Eid ul-Fitr means the Festival of Breaking the Fast; a special celebration is made. Food is donated to the poor (Zakat al-fitr); everyone puts on their best, usually new, clothes; and communal prayers are held in the early morning, followed by feasting and visiting relatives and friends. The prayer is two Raka'ah only, and it is obligatory (Wajib) prayer[17] as opposed to the compulsory (Fard) five daily prayers. Muslims are expected to do this as an act of worship, and to thank God. Ramadan in the Old City of Jerusalem

Ramadan is met with various decorations throughout the streets. In Egypt, lanterns are known to be a symbol of Ramadan. They are hung across the cities of Egypt, part of an 800 year old tradition, the origin of which is said to lie in the Fatimid era where the Caliph Al-Muizz Lideenillah was greeted by people holding lanterns to celebrate his ruling. From that time lanterns were used to light mosques and houses throughout the city. The traditional local made lanterns are losing popularity due to inexpensive made plastic lanterns that look like TV characters, which attract children. The traditional lanterns in Cairo are made in various places especially near the Bab Zuweila gate.[18]

New Arabic TV shows are broadcast every year in Ramadan on Arabic channels with advertisements about them, months before the advent of Ramadan. Egyptian and Syrian TV shows are the dominant shows that are being viewed by people in the various Arab countries.[19] The number of TV shows are rising rapidly, with 38 TV shows produced for Ramadan in 2009 and 50 in 2010. The budget for TV shows have also risen rapidly to set a record in 2010 to be 750 million Egyptian Pounds (EGP) for the total of 50 shows. In 2009 the highest budget for a TV show was 25 million EGP while in 2010 this rose to over 40 million.[20]