The many stages of imperialism are often brought into debate about whether the current US foreign policy, or any US 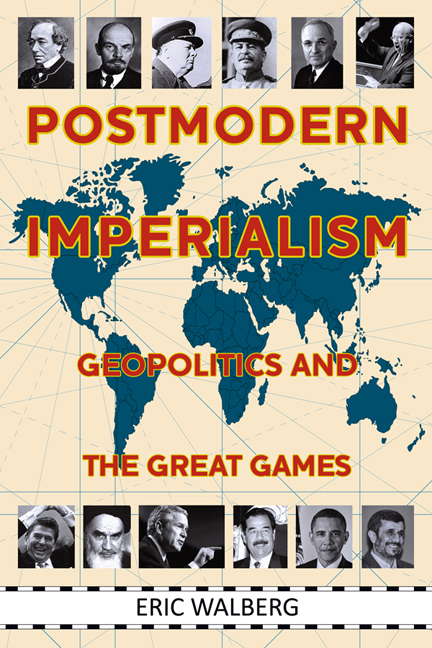 foreign policy, is an imperial project. Eric Walberg’s clear and concise presentation of the “great games” centred on the ancient Silk Road from China through to Eastern Europe presents a definition of imperialism that spans all of humanities’ empires. The “Foundations…of imperial hegemony are financial and military-political, to ensure control of world labour power and raw materials.” This reflects my own interpretation of empire as being founded on the gathering in of wealth and power to the heartland from the hinterland, from a cultural geography perspective. Walberg uses the terms heartland and rimland, the same idea, focusing intentions on the heart of Eurasia and the surrounding countries’ resources, wealth, and manpower.

One of Walberg’s underlying and recurring themes is financial - the power of money and the control of money in the establishment of empire. This precludes any arguments about the necessity of an empire having a land base, or naval control, or air superiority, the actual sequence of empires from antiquity through to today’s troubled world. Walberg goes even further than most in his definitions of empire, rightly so, as he examines the ‘banksters’ (my usage, a term that should fit within the normal lexicon of financial arguments today) - the “international banking elite” who are “acting independently of governments” in order to coordinate “the financial elites of various empires through their central bankers.”

The military becomes the physical manner in which the financial structures try to control the various regions of interest, and once again after the dust and gore of war has settled out, the banksters win - as the real victors are those who “benefited financially and economically, and the international bankers, who held the massive war debts of victors and defeated alike, and had not intention of forgiving them.”

The Great Games are compared metaphorically in part to chess, wherein a pawn arriving at the last square becomes a queen. In Walberg’s metaphor the queens are the new elements of the game that influence who controls the main thrust of imperial drive. Five such queens are presented. The first is the “ascendancy of the US dollar as world reserve currency.” The second queen, the partition of Palestine [the creation of Israel] proved to be a geostrategic coup for the US in its geopolitical divide and rule strategy for the Middle East,” not without its later blowback consequences as described later in the work. Locked into its cold war with communism, Walberg sees the cultivation of Islamists against communism as the third queen. The mujahideen, Ronald Reagan’s “freedom fighters” brought to a close the second great game in Eurasia (the first being the historically defined “games” between the British and Russian empires).

With the collapse of the Soviet Union and the rise of the neocons to power in the US, the world entered Walberg’s “Great Game III.” These ideologues were “devotees of Israel’s game plan,” from which Walberg presents the thesis of the “penetration of the Jewish elite into the highest political offices,” creating “long-term, large scale presence of unconditional Israel-firsters across the administrations…over the past two decades.”

Controlling Europe, establishing a perimeter around Russia and China, and the unconditional support for Israel - even as the latter went about its own empirical interests sometimes contrary to the large empires interests - are the main considerations for the Great Game III. The first “queen promotion” of this current era is the redefinition of NATO as essentially being a US controlled imperial force, “a group of like-minded countries [their ruling elites at least] under the overwhelming political and military authority of the empire - controlling the world at the behest of the empire once removed.”

This is more than obvious with the wars that broke apart Yugoslavia, the invasions and occupations of Iraq and Afghanistan, and the new debacle in Libya, under the false guise of humanitarian action, but mainly concerning the three main concerns of empire: financial control of an independent nation, controlling its oil wealth to be priced in US dollars, and the strategic positioning of a newly subordinated country on the southern edge of the US/NATO lake of the Mediterranean, and also a foothold for US forces into northern Africa.

Back onto one of Walberg’s central ideas, the Great Game III is a demonstrably financial pursuit, with the bankrupting of Russia after its imperial death, the removal of constraints on financial manipulations within the US, and the current meltdown in the EU is seen as a “financial crisis precipitated by the US banks [to promote] greater economic integration of the EU around its poorer members, in line with the US strategy of maintaining the EU as a junior partner similar to Britain.” Globalization in essence consists of the strategies of the financial elites to control the wealth of nations, a control that goes well beyond the national level where the pretext of democracy and choice are well maintained by the mainstream media.

The end game for the Great Game III is the “control over the world’s money supply” as a means of “taxing the world’s resources.” As long as the world accepts the US dollar as the reserve currency, “such an imperial system could last for a long time, despite the creeping de-industrialization that empire logic eventually entails.” This strikes me as a fancier way of saying the rich get richer and the poor get poorer. It is evident in the IMF and World Bank actions against Greece, Ireland, and other Euro states that have effectively ceded their financial and thus sovereign authority to the banksters.

Having touched on Israel in the third chapter concerning US imperial drives and methods, Walberg takes on the ideas and actions of Israel directly in his final chapter “Israel - Empire-and-a-half.”

Walberg discusses the long history of Jewish financial strength, and the rise of Jewish-Zionist power in Israel. For the US to recognize that “Israel would serve to ensure Middle East oil supplies - the chief underlying goal of US empire in the Middle East -while leaving itself room to pursue its own agenda of expansion, it was necessary for Israel to continue to antagonize the local Arabs, rather than make concessions to obtain peace. Without hostile neighbours, it would be of no use to the US.” Walberg recognizes that the Jewish elite while benefiting from others’ wars, “had no particular interest in being involved directly…this state of perpetual war is a new strategy made necessary by the colonial nature of Israel itself.”

The wars against the Arab countries, the war on ‘terror’, are all part of the US/Israeli complicity to establish hegemony over the region, but the continuing circle of financing arms purchases by both Israel and the Arab countries, and the increasing military trade of Israel, allows the latter to “proceed quietly with its own, increasingly anti-US agenda.” Israel is seen to “incite, abet and possibly even perpetrate terrorism attributed to Muslim fanatics,” it increasingly “pursues plans outside of US control…and forestalls any attempts to pressure Israel into following a US agenda.”

Walberg outlines the global span of Israeli influence. This extends from what is labelled the Jewish mafia (crime syndicates) through its political influence within the US and other countries (Canada is noted), its arms sales, its operatives, mercenaries, and businessmen who operate globally and for their own, not US interests. Ultimately though, because Israel is also tied to US dollar hegemony, it rests uncomfortably. Actions of the Israeli state could bring about an endgame that hastens the US collapse. As an empire-anda-half, the “empires mimic each other - Israel is a microcosm of the US; the US is Israel writ large.

And finally, Walberg concludes that “Without Israel at its core, the US empire quite possibly could have lasted a long time…But unless the US frees itself from Israel’s clutches and forces it to make peace with its neighbors, the US is doomed along with its offspring.”

While looking at future possibilities, Walberg sees Palestine, “despite its helplessness [is] in a sense the most powerful player of all…its tragic fate a constant reminder of the injustice and horrors of GGI colonialism for all around the world to witness every day. And yet it has never really existed as a legitimate modern state.” At most, Israel could create a failed state, yet sees that after “Four decades of illegal settlements, such a Palestinian state is no longer feasible.” For current affairs and the near future, “Palestine will remain at the center of the world’s concerns,” for the players of geopolitical games” and as a “catalyst” for those “concerned with social justice.”

The US holds the worlds reserve currency; oil is priced in US dollars; the establishment of empire is to retain the power of the dollar as the global currency. Both Israel and the US “depend on the present world financial order.” All this influence, the “Interest [rent, taxes, austerity budgets], and today’s money based on US military might alone, are the root cause not only of the current world financial crisis, but…the primary instrument facilitating (and benefiting from) the wars in the Middle East and Central Asia, and the world political crisis.”

In my mind, that reads that the loss of US dollar reserve currency status would signal major and significant changes to the world order. With all economies of the world beholden to the banksters of the world - the WTO, IMF, supra-national corporations, the financial corporations and bankers at all levels - the current world order stands firmly on earthquake prone territory.

Eric Walberg’s treatise on the Great Games, on Empire, is an excellent read. It is not a blow by blow account of the rise and fall of empires involved with the Great Games, but an accounting of their methods and raison d’etre. It is a dense read, provocative, bold, touching on ideas that seldom appear in mainstream presentations. It is a significant and important addition to the geopolitical and political-military thinking of the global cultural environment of finance and wars.

Jim Miles is a Canadian educator and a regular contributor/columnist of opinion pieces and book reviews for The Palestine Chronicle. Miles' work is also presented globally through other alternative websites and news publications.

Postmodern Imperialism: Geopolitics and the Great Games is available at http://www.claritypress.com/Walberg.html