In "The Least Worst Place," Karen Greenberg burrows beneath layers of toxic history to excavate a brief and largely forgotten

period when the military detention facility at Guantanamo Bay was not yet notorious. On Sept. 11, 2001, the naval base was an isolated outpost on the southeastern tip of Cuba where the commander described his orders as little more than a mission "to keep the lights on."

But then the 45-square mile American enclave, half of it underwater, came to the attention of policy-makers in Washington searching for a detention center to house prisoners piling up on the battlefield in Afghanistan. Officials had considered locations in Europe and far-flung U.S. territories such as Guam, Wake Island and American Samoa before a Justice Department representative at an inter-agency meeting blurted out, "What about Guantanamo?" 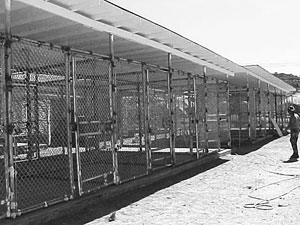 And it did seem a perfect piece of real estate for the task. The base had coped in the past with large numbers of Cuban and Haitian refugees, and, critically for the Bush administration, it appeared to be beyond the jurisdiction of American courts. In her granular study of the facility's first 100 days, Greenberg, executive director of the Center on Law and Security at New York University Law School, has written a surprising and fascinating account of how military officers in Guantanamo struggled in the absence of any clear direction from Washington to create internationally acceptable conditions for their prisoners. The officers' task was further complicated when they began to realize that men whom they first received with dread were often pathetic foot-soldiers.

As the first 20 detainees were about to be flown to Guantanamo in January 2002, Air Force Gen. Richard Myers warned that if given the opportunity these suspected terrorists might "gnaw hydraulic lines in the back of a C-17 to bring it down." When they finally did arrive, Greenberg writes, the "worst of the worst" were something of a let-down: "disheveled and frail, wobbly from their long trip, stinking of urine and wearing blackened goggles, earmuffs, orange socks, and knitted caps, they looked like aliens perhaps but not like purveyors of danger and destruction."

Of course, there were extremely dangerous men among the captives, but too many, as the military, the CIA and others quickly realized, didn't belong in Guantanamo: One was 90 years old; another near death; and another, nicknamed Wild Bill, was so clearly mentally ill that he disturbed his fellow prisoners as much as his jailers.

At the moral center of Greenberg's story is Brig. Gen. Michael Lehnert, commander of a joint task force to guard the prisoners, who "believed that principled humanitarianism was not only compatible with, but essential to, the Marines' sacred code." Performing logistical somersaults, Lehnert and his team rushed to ready the base and, when the prisoners arrived, attempted to create a humane regime within the confines of Secretary of Defense Donald Rumsfeld's instructions that the United States would be guided by the Geneva Conventions but not bound by them.

Without consulting the Pentagon, Col. Manuel Supervielle, a staff judge advocate, called the International Committee of the Red Cross in Geneva and asked if the organization would be interested in coming to Cuba. "This is kind of you. . . . The answer is yes" was the response. The Red Cross and Lt. Abuhena Saifulislam, a Muslim military chaplain whom Lehnert made central to his administration, gradually facilitated some level of communication and cultural understanding between guards and prisoners. Lehnert, at the same time, refused to tolerate abuse.

But tensions inevitably arose as the number of men held in the open-air cages known as Camp X-Ray swelled to 300 within a month of its opening. Allegations of profaning the Koran sparked riots, which were followed by a hunger strike. In an extraordinary scene, Greenberg describes Lehnert weeping before the caged prisoners in an effort to get them to eat again. He also isolated the leaders of the hunger strike from the general population. All but the most hard-core were persuaded to end their fasts.

Lehnert was replaced after the Pentagon created a separate force with a more senior officer to coordinate the interrogation of detainees in support of the war on terror. The drive for actionable intelligence from detainees who often didn't have it proved to be a crucial -- indeed, historic -- mistake whose legacy endures. By sweeping so many combatants off the battlefield, by tolerating brutality in the search for intelligence, and by insisting that the executive branch alone made the rules, the Bush administration lost the opportunity to create an internationally accepted detention policy for that select group of truly dangerous al-Qaeda and Taliban operatives.

Whether Guantanamo could have stayed out of controversy is questionable, particularly in a war of indefinite duration. But if the protocols established under Lehnert had continued, Greenberg concludes, "the reputation of the United States would not have been as damaged as it has been by the unabashed pushing aside of law." Greenberg has written an important and compelling work that others will turn to fruitfully in writing the full history of Guantanamo.

Peter Finn is a foreign correspondent for The Washington Post.