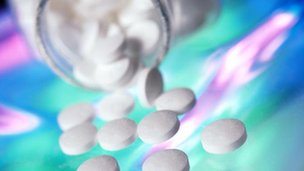 This personal decision came after a study in the Lancet suggested that aspirin use could substantially cut the risk of cancer.

New research from Newcastle University seems to support the theory that aspirin may have a preventive effect.

Also published in the Lancet, it shows that, over two years, taking aspirin reduced the incidence of bowel cancer by 63% in a group of 861 people who were at high risk of the disease because they had Lynch syndrome.

Last year's study had been designed to look at preventing heart disease, but it also found that long-term use of aspirin reduced deaths from cancer by around 25%.


This latest study took things forward as it was the first aspirin trial where bowel cancer incidence was the focus.

But there are still questions outstanding. The specific group of patients involved were already at high risk of developing bowel cancer. But although this group benefited, what level of protection might be gained by other adults?

The researchers are also unclear exactly how aspirin works and what amount is needed.

Those on the trial took 600mg aspirin daily which is a much bigger dose than the 75 mg that many middle-aged people like me take to reduce their risk of cardiovascular disease.

Then there is the risk of side-effects including bleeding from the stomach and gut.

I wrote last year: "If I get an intestinal bleed in a few months time and am taken to hospital needing a blood transfusion, then it will be easy to argue that I got it wrong."

Well, so far so good.

US experts said these latest findings might "tip the scales" towards more people choosing to take aspirin in a bid to prevent cancer.

But the decision must still rest with individuals who need to look at the potential risks, as well as the benefits.