Rape Is A Crime In Every Society...Muslim Say Or Do Something! This Could Be Your Daughter Or Sister

Kabul (CNN) -- The ordeal of Gulnaz did not simply begin and end with the physical attack of her rape. The rape began 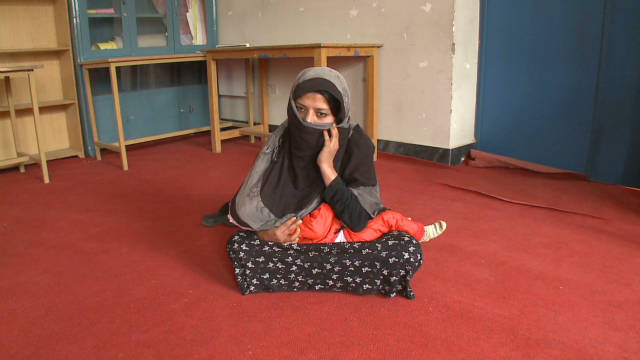 Afghan woman's choice: 12 years in jail or marry her rapist and risk death

a years-long nightmare of further pain, culminating in an awful choice she must now make.

Even two years later, Gulnaz remembers the smell and state of her rapist's clothes when he came into the house when her mother left for a brief visit to the hospital.

"He had filthy clothes on as he does metal and construction work. When my mother went out, he came into my house and he closed doors and windows. I started screaming, but he shut me up by putting his hands on my mouth," she said.

The rapist was her cousin's husband.

After the attack, she hid what happened as long as she could. But soon she began vomiting in the mornings and showing signs of pregnancy. It was her attacker's child.

In Afghanistan, this brought her not sympathy, but prosecution. Aged just 19, she was found guilty by the courts of sex outside of marriage -- adultery -- and sentenced to twelve years in jail.

Now inside Kabul's Badam Bagh jail, she and her child are serving her sentence together.

Sitting with the baby in her lap, her face carefully covered, she explains the only choice she has that would end her incarceration.

The only way around the dishonor of rape, or adultery in the eyes of Afghans, is to marry her attacker. This will, in the eyes of some, give her child a family and restore her honor.

Incredibly, this is something that Gulnaz is willing to do.

"I was asked if I wanted to start a new life by getting released, by marrying this man", she told CNN in an exclusive interview. "My answer was that one man dishonored me, and I want to stay with that man."

Tending to her daughter in the jail's cold, she added: "My daughter is a little innocent child. Who knew I would have a child in this way. A lot of people told me that after your daughter's born give it to someone else, but my aunt told me to keep her as proof of my innocence."

Gulnaz's choice is stark. Women in her situation are often killed for the shame their ordeal has brought the community. She is at risk, some say, from her attacker's family.

We found Gulnaz's convicted rapist in a jail across town. While he denied raping her, he agreed that she would likely be killed if she gets out of jail. But he insists that it will be her family, not his, that will kill her, "out of shame."

Whether threatened by his family or hers, for now, jail may be the safest place for her.

CNN asked a spokesman for the prosecutor to comment on the case. The reply was that there were hundreds such cases and the office would need time to look into it.

But Gulnaz's plight has found international attention because of a dispute between the European Union and a team of documentary makers hired to report on women's rights in Afghanistan.

The documentary makers filmed a lengthy report on Gulnaz and other women, showing her talking openly about her fate. They showed the film to the EU, who were paying for it as part of a project on female rights here. After viewing it, the EU decided to spike the project.

The EU said it was concerned about the safety of the women in the film: they could be identified and might face reprisals. The filmmakers however suspect -- citing an email leaked from the EU delegation -- that the EU might also be motivated by its sensitive relationship with Afghan justice institutions, since he film shows the Afghan justice system in a very unflattering light.

The leaked email says: "The delegation also has to consider its relations with [Afghan] Justice institutions in connection with the other work that it is doing in the sector."

The EU Ambassador to Afghanistan, Vygaudas Usackas, rejected any political motivation in asking for the film not to be shown.

"What I am concerned about is that situation of the women. About the security and well being, that's of paramount importance, the key criteria according to which I, as representative of the European Union will judge," said the ambassdor.

Under Afghan law, Gulnaz has been judged an adulterer. Despite the ongoing dispute over her story, her predicament has not changed. She faces the hideous choice of 12 years in jail or marriage to her rapist and risk death. It's a marriage she says she'll accept, so her child can continue to have a mother.