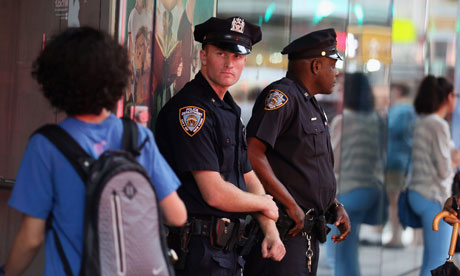 ordered that a federal monitor be brought in to oversee their reform.

In a major victory for civil rights activists who have long contended that stop-and-frisk amounts to racial profiling, US district court judge Shira Scheindlin said the stops violated individuals' right to privacy and equal treatment under the law.

She added that testimony had led her to believe that the NYPD carries out more stops of black and Hispanic residents, "even when other relevant variables are held constant".

"This is so even in areas with low crime rates, racially heterogenous populations, or predominantly white populations," Scheindlin ruled.

"In practice", she wrote in a 195-page ruling, "the policy encourages the targeting of young black and Hispanic men based on their prevalence in local crime complaints. This is a form of racial profiling."

Stop-and-frisk violated an individual's right to protection under the fourth and 14th amendments of the constitution, Scheindlin concluded. She called for an "immediate" change to the policy, and the appointment of an independent monitor to ensure that the NYPD carries out stop-and-frisks in accordance with the US constitution.

Peter Zimroth, a one-time city lawyer and a former chief assistant district attorney, was named as the monitor, tasked with making sure adequate changes are made to the policing policy. He will work closely with the NYPD in implementing the new procedures, the judge said.

The verdict follows a two-and-a-half month trial resulting from a federal class action lawsuit filed by four African American men in 2008. They claimed to represent hundreds of thousands of New Yorkers unlawfully stopped by the NYPD.

Eight more witnesses, all African American or Latino, testified to being stopped, and in some cases frisked and searched, unlawfully.

The case – Floyd v City of New York – was the result of 14 years of litigation against the stop and frisk policy.

Over the past decade, an estimated 5 million people have been stopped by the NYPD. The vast majority have been African American or Hispanic, and roughly nine out of 10 have walked away without an arrest or a ticket.

By law, a police officer must have reasonable suspicion that a crime is about to occur, or has occurred, in order to make a stop. But Darius Charney, an attorney for the plaintiffs, said in opening statements that the NYPD has "laid siege to black and Latino communities" through "arbitrary, unnecessary and unconstitutional harassment".

The longstanding policy has been defended by city mayor Michael Bloomberg and New York police commissioner Ray Kelly. Both men have argued that it has played an instrumental role in bringing murder rates to record lows.

Kelly nor Bloomberg testified during the trial, but the pair used their positions to mount a public defence of the city's police force. In a speech at police headquarters in early May, as the trial entered its closing phase, Bloomberg declared the NYPD was "under attack", and mounted an impassioned 22-minute defence of the department, rejecting the central claims in the case.

The following night, Kelly told ABC News that the NYPD is run like a major business and said African Americans were not stopped as much as they might be. A month earlier, Kelly appeared on a local NY1 news show, Road to City Hall, and attempted to discredit Scheindlin.

"In my view, the judge is very much in their corner, and has been all along throughout her career," he said.

In the final week of testimony, an internal report from the mayor's office was leaked to the New York Daily News, purporting to show that Judge Scheindlin was "biased against law enforcement." Scheindlin called the report "completely misleading."