As the world celebrates Nelson Mandela's 95th birthday, it is timely to reflect on his life, spent fighting for equality for

people of color who long suffered under South Africa's apartheid regime. Mandela was arrested in 1962, a year before Martin Luther King Jr would give his "I Have a Dream" speech in Washington, DC. After 27 years in prison, Mandela was released in 1990. Four years later, he would become the first democratically elected president of South Africa.

We should use Mandela's incredible life to shine a light on injustice in the United States, as George Zimmerman is acquitted of killing Trayvon Martin, and as a massive hunger strike envelops the US military prison at Guantánamo Bay, where scores of men have been held without charge for more than a decade. 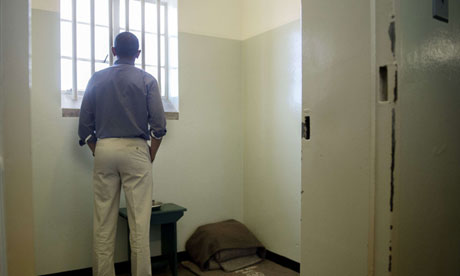 President Obama looks out of the window from the cell where Nelson Mandela was once jailed on Robben Island. Photograph: Jim Watson/AFP/Getty Images
President Obama recently paid tribute to South Africa's anti-apartheid leader – we need to bring Mandela's example home

When President Barack Obama visited South Africa recently, he took his family to Robben Island, the notorious apartheid-era prison off the coast of Cape Town. First Lady Michelle Obama said of the experience:

It was amazing to see Mandela's cell, a tiny room – about 6ft wide – where he spent 18 of the 27 years he was in prison. He slept on a thin mat on the floor, and when he stretched out to sleep at night, his toes touched one wall, while his head grazed the other. The walls were 2ft thick with no decorations, and he was given a bucket to use as a toilet.

On behalf of our family we're deeply humbled to stand where men of such courage faced down injustice and refused to yield. The world is grateful for the heroes of Robben Island, who remind us that no shackles or cells can match the strength of the human spirit.

"We don't need a lecture; we need a leader," Col Morris Davis told me. He is a retired US air force colonel, and was the chief military prosecutor at Guantánamo Bay – until he resigned in 2007, refusing to use statements obtained through torture. He went on:

When President Obama and his family visited South Africa, he took Sasha and Malia to visit [Robben Island]. And at the same time, he's operating an island prison in Guantánamo, where the majority have been cleared to be transferred out. There are people that have been there for 11 and a half years that we have cleared to be transferred home, and they still sit in prison.

While Obama's two elections as president prompted many to declare a post-racial America, the Zimmerman trial verdict last week exposes that fallacy. Phillip Agnew is the executive director of Dream Defenders, a network of black and brown youth and their allies in Florida who are fighting for equal rights and education. Following the verdict, he told me:

It's our refusal as a country to acknowledge that we still have a race problem in America that creates environments for a man like George Zimmerman to walk around, as he does now, with a gun, looking to take down young people of color.

The Dream Defenders mobilized immediately after Zimmerman's acquittal, and descended on Tallahassee, the capital of Florida, where they occupied the offices of Republican Governor Rick Scott. They want Scott to call a special legislative session to repeal Florida's "stand your ground" law, which expands a person's right to use deadly force in a confrontation, and vowed to remain until their concerns are addressed. As civil rights attorney and author Michelle Alexander wrote on her Facebook page:

If Trayvon Martin had been born white he would be alive today. If he had been white, he never would have been stalked by Zimmerman, there would have been no fight, no funeral, no trial, no verdict.

Meanwhile, in California, thousands of prisoners are also on the largest hunger strike in state history. Among their demands: an end to long-term solitary confinement, where more than 3,000 prisoners are held in the isolation units with no human contact and no windows – some of them for more than a decade.

Nelson Mandela told an interviewer in 1993:

Once you have rid yourself of the fear of the oppressor and his prisons, his police, his army, there is nothing that they can do. You are liberated."

From South Africa to Sanford, Florida, from Pelican Bay to Guantánamo Bay, courageous people are taking a stand, fighting for justice, a fitting birthday tribute to President Mandela.