ATLANTA — Around Sept. 11, 2001, not long after she founded the Islamic Speakers Bureau of Atlanta, Soumaya

Khalifa heard from a group whose name sounded like “Bakers Club.” It wanted a presentation. 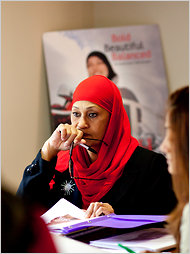 The address was unfamiliar, but she went anyway. The group turned out to be the Bickerers Club, whose members love to argue. Islam was their topic du jour and their venue was a tavern. Ms. Khalifa laughed, and made the best of it.

Ms. Khalifa, who was born in Egypt and raised in Texas, wears a head scarf but also juggles, comfortably, the demands of American suburbia: crowded schedule, minivan and all.

She is one of a type now found in most sizable U.S. cities: vocal Muslim women wary of the predominantly male leadership of their community and increasingly weary of suspicions of non-Muslims about Islam.

These women have achieved a level of success and visibility unmatched elsewhere. They say they are molded by the freedoms of the United States — indeed, many unabashedly sing its praises — and by the intellectual ferment stirred when American-born and immigrant Muslims mix.

“What we’re seeing now in America is what has been sort of a quiet or informal empowerment of women,” said Shireen Zaman, executive director of the Institute for Social Policy and Understanding, a nonprofit research institute founded after the 2001 attacks to provide research on American Muslims. “In many of our home countries, socially or politically it would’ve been harder for Muslim women to take a leadership role. It’s actually quite empowering to be Muslim in America.”

As Najah Bazzy, a American-born nurse and founder of several charities in Michigan, put it: “Yeah I’m Arab, yeah I’m very American, and yeah I’m very Islamic, but you put those things in the blender and I’m no longer just a thing. I’m a new thing.”

It is not always easy. Several of the Muslim women interviewed for this article said they had been the object of abusive letters, e-mails or blog posts.

Yet in their quest to break stereotypes, America’s Muslim women have advantages. They are better educated than counterparts in Western Europe, and also than the average American, according to a Gallup survey in March 2009. In contrast to their sisters in countries like Egypt and Saudi Arabia, they are just as likely as their menfolk to attend religious services, which equates to greater influence. And Gallup found that Muslim American women, often entrepreneurial, come closer than women of any other faith to earning what their menfolk do.

“Muslims coming to North America are often seeking an egalitarian version of Islam,” said Ebrahim Moosa, an associate professor of Islamic studies at Duke University. “That forces women onto the agenda and makes them much more visible than, say, in Western Europe.”

Besides her speakers’ bureau, which advertises itself as “a bridge between Islam and Americans of other faiths,” Ms. Khalifa heads a consultancy working with students, executives, soldiers and even the F.B.I. to overcome stereotypes. Some people she addresses have never met a Muslim. Some look askance at head scarves.

Ms. Khalifa, who has degrees in chemistry and human resources, began wearing a head scarf in her mid-30s, about 15 years ago. At first, she said, people looked at her “like I was different, Muslim, un-American, stupid.”

But she is quietly persistent. When a small-town newspaper refused to run Ms. Khalifa’s ad listing the hours of a nearby mosque, she organized a successful boycott by local churchmen.

Perhaps the most noticed figure among American Muslim women is Ingrid Mattson. In a bright-red jumper and multicolored head scarf, she stood out among the gray-haired clerics in black who gathered in Washington in September to try and defuse the anger over the planned mosque near the World Trade Center site in New York.

Ms. Mattson, who is 47 and teaches at the Hartford Seminary in Connecticut, became the first woman to head the Islamic Society of North America, one of the largest Muslim associations on the continent.

She was first elected vice president on Sept. 4, 2001, then president in 2006, a position she held until September; those years were so full of sound and fury over all things Muslim that gender took a back seat.

But what happened on Sept. 11 and after has led American Muslims to be more involved in civic society,” Ms. Mattson said, “and Muslim women were finding that a very rich area for activity.”

Azizah is a magazine for Muslim women published in Atlanta.

“The only area where there’s a limitation is religious leadership — the imam,” she added, predicting that “we will have some communities in the future that have female imams.”

Historically, Muslim women have wielded power from behind the scenes, with notable exceptions like Benazir Bhutto, the late former prime minister of Pakistan. A 2009 survey of the world’s most influential Muslims by Georgetown University and the Royal Islamic Strategic Studies Center listed just 2 women in the top 50: a Syrian religious leader and Queen Rania, wife of the Jordanian king. Ms. Mattson received an honorable mention.

Muslim women in the United States reflect the country’s diversity: white converts like Ms. Mattson, women of Middle Eastern background like Ms. Khalifa, or Tayyibah Taylor, a convert of Caribbean descent in Atlanta who founded a glossy magazine, Azizah, to celebrate Muslim women of achievement.

The magazine may profile “America’s first all-Muslim, all-female law group” or a hijab-wearing flight attendant, but it also takes up issues like AIDS and spousal abuse. Despite its struggles, Azizah, with a circulation of 45,000, recently celebrated its 10th birthday.

“I didn’t see Islam as taking my freedoms as a woman,” said Ms. Taylor, who is 57 and studied the Koran in Jidda for six years. “It really opened up worlds for me.”

The Muslim population in Atlanta, now estimated at 80,000, has its roots in the 1950s, when a small group of Nation of Islam worshipers, mostly black men, met in a grubby building shared with a chapter of the Ku Klux Klan. Waves of immigrants from South Asia, the Middle East or, most recently, Bosnia and Herzegovina, swelled its ranks. The metropolitan area, with 5.5 million people, now has 40 mosques.

But while Muslim women have gained prominence, much of their activity remains outside the mosque.

“There is a missing link in terms of what the Muslim religion teaches about gender equality,” Ms. Khalifa said. “The leadership in our mosques is not reflective of our population — there are hardly any women.”

Imam Plemon T. el-Amin, a retired leader of the Atlanta Masjid of Al-Islam, talked of “a slow move — really an indecisiveness — about getting women fully involved in day-to-day Islamic activities.” That, he said, is changing.

One issue is gender separation at prayer, imposed to reflect Islamic notions of modesty. In some mosques, women are relegated to separate rooms. But, Imam el-Amin said, “I’m seeing mosques do much better at trying to make those separate accommodations equal.”

Ms. Mattson’s election to lead the Islamic Society of North America, or ISNA, was a signal moment.

Her election “broke a barrier and made it much more acceptable for women to take a leading role as leaders of the entire community, not just women,” said Dalia Mogahed, executive director of the Gallup Center for Muslim Studies and a former adviser on faith issues in the Obama White House.

Imam el-Amin added, “That’s exactly what ISNA and many of the Muslim organizations needed to see.”