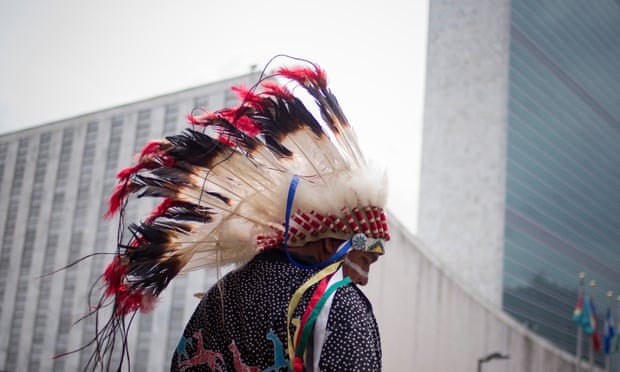 More cities are recognising Native Americans on Columbus Day this year as they revive a movement to change the name of the holiday and celebrate the history and contributions of indigenous cultures.

As the US observes Columbus Day on Monday, it will also be Indigenous Peoples Day in at least nine cities, including Albuquerque; Portland, Oregon; St Paul, Minnesota; and Olympia, Washington.

Encouraged by city council votes in Minneapolis and Seattle last year, Native American activists made a push in dozens of cities in recent months to get local leaders to officially recognise the second Monday of October as Indigenous Peoples Day. Their success was mixed.

The campaigns say the federal holiday honoring Christopher Columbus – and the parades and pageantry accompanying it – overlooks a painful history of colonialism, enslavement, discrimination and land grabs that followed the Italian explorer’s 1492 arrival in the Americas.

The indigenous holiday takes into account the history and contributions of Native Americans for a more accurate historical record, activists have argued. Columbus Day supporters say the holiday celebrates centuries of cultural exchange between America and Europe, commemorates an iconic explorer and honors Italian Americans, a group that has endured its own share of discrimination.

“For the Native community here, Indigenous Peoples Day means a lot. We actually have something,” said Nick Estes of Albuquerque, who is co-ordinating a celebration on Monday after the city council recently issued a proclamation.

“We understand it’s just a proclamation, but at the same time, we also understand this is the beginning of something greater.”

Native Americans are the nation’s smallest demographic, making up about 2% of the US population. In recent decades, a significant number of tribal members have moved from reservations to urban areas, where a large majority live today. The shift makes the cities’ resolutions and proclamations more meaningful, Estes said.

Congress set aside the second Monday of October as a federal holiday honoring Columbus in 1934. Over the years, Native Americans have slowly begun winning more recognition around the day. South Dakota renamed Columbus Day to Native American Day in 1990, and it has been an official state holiday ever since. Berkeley, California, has observed Indigenous Peoples Day since 1992.

Parades and festivals that developed around Columbus Day have faced protests that are known for being confrontational, especially in Denver.

Anna Vann, a long-time member of the Sons of Italy’s Denver Lodge, recalls protests during the 1992 parade, which marked the 500th anniversary of Columbus’ voyage, as the most unnerving and pivotal.

That year, protesters blocked the parade route for several hours, she said. After that, the parade wasn’t held again until 2000, and it has been difficult to make it the draw it once was, she said.

“It’s been a struggle to even get people to come and attend the parades as spectators,” Vann said. “It’s a celebration of when the Europeans came over and started their lives here. We wouldn’t be where we are today if it weren’t for this history.”

The renewed push for Indigenous Peoples Day carries the sentiment of past decades’ protests against Columbus, but it has proven less confrontational, with advocates instead finding traction at city hall.

“They really didn’t prove anything,” Rey Garduno, an Albuquerque city councilman and longtime community organiser, said of the confrontational protests. “Whatever victory people took from them, you still ended up at the end of the day in the same place or even worse.”