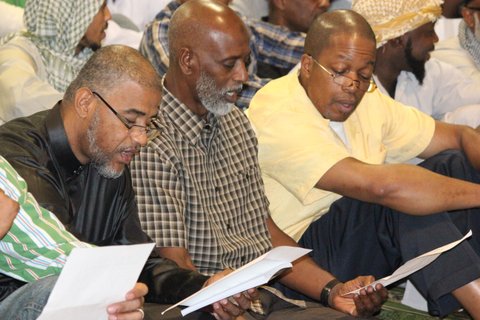 the Muslim community in America will celebrate the end of the month-long fast of Ramadan with communal prayers around the country. (Ramadan is the month on the Islamic lunar calendar during which Muslims abstain from food, drink and other sensual pleasures from break of dawn to sunset.)

The prayers mark the beginning of the Eid ul-Fitr (EED-al-FITTER), or "feast of fast breaking" holiday, in which Muslims exchange social visits and seek to strengthen family and community bonds. During this holiday, Muslims greet each other by saying "Eid mubarak" (EED-moo-BAR-ak), meaning "blessed Eid," and "taqabbalallah ta'atakum," or "may God accept your deeds." Many communities also hold multicultural bazaars and other family activities following the prayers.

Eid ul-Fitr is the first of the two major Muslim holidays. The second holiday, Eid ul-Adha (EED-al-ODD-ha), comes at the end of the Hajj, or pilgrimage to Mecca.

WHEN: On Thursday and Friday, August 8 or 9 (Consult local mosques for dates and times.) Prayers are held early in the morning. Ask local prayer coordinators for exact dates, times and locations.

WHERE: The Eid prayers are held either in local mosques or in public facilities designed to accommodate large gatherings.

CONTACT: Call local Muslim organizations for details about Eid celebrations. If there are no known contacts in a particular community, contact the nearest CAIR chapter.

PHOTO OPPORTUNITY: Each year, Muslims come to the prayers in colorful attire representative of different areas of the Islamic world. The prayers themselves are quite visual, with worshipers arranged in neat rows and bowing in prayer in unison. Participants exchange embraces at the conclusion of the prayers.

NOTE: Because this is a religious service, reporters and photographers of both sexes should dress modestly. Some communities may ask female reporters and photographers to put a scarf over their hair while in the actual prayer area. Photographers should arrive early to get into position for the best shots. Photographers are also advised not to step directly in front of worshipers and to seek permission for close-up shots. Shots of shoes removed for prayer, and rear-angle shots of prostrating worshipers are considered inappropriate.