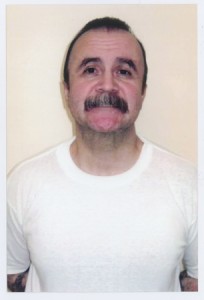 Gabriel Huerta, 28 years in the SHU at Pelican Bay

Today marks the 39th day of California’s prison hunger strike, which began on July 8th. According to the medical receiver’s office, a total of 93 in the past week have required medical assistance. At least one was sent at a community hospital following complications from re-eating four days ago. Last night, a hunger strike participant was transported to a hospital, and has since resumed eating. He will reportedly remain hospitalized to be monitored as he begins eating again. On August 11th, three hunger strike participants were taken to hospitals as they began the process of re-eating.

According to the latest figures from the California Department of Corrections and Rehabilitation (CDCR), yesterday, 252 inmates in eight institutions were on hunger strike, of whom 125 have been on continuously since July 8. The figures provided by CDCR indicate that, over the past few days, significant fluctuations have been occurring. In the last three days, the number of facilities participating in the hunger strike grew from six to eight. CDCR refuses to disclose what facilities are experiencing hunger strike activity and has been adamant that the entire hunger strike is a “gang power play,” as CDCR chief and former psychologist Jeffrey Beard wrote in a Los Angeles Times Op-Ed. Disclosing the locations where the hunger strike is occurring, according to CDCR, would endanger those who are not currently on hunger strike.

Yesterday, hunger strike supporters rallied at the Capitol in Sacramento to urge legislators to take action. As part of their efforts, they set up a mock SHU cell. The event drew several speakers, including Assemblyman Tom Ammiano, who has convened two Assembly hearings on the SHU since 2011. Ammiano is quoted by the Prisoner Hunger Strike Solidarity coalition as saying: “There has been some very bad press on this—demonizing us for being activists for human rights for prisoners.  We know that there are some people who have committed some very egregious crimes but that’s not the issue… looking at everyone as if they are a gang member and isolating them. We don’t support that.  We want appropriate steps to be taken.”

Governor Jerry Brown has remained silent on the issue of the hunger strike. This is despite the increasingly life-threatening situation that the hunger strikers are currently facing. One hunger strike participant, Billy Sell, is already known to have committed suicide after two weeks of hunger striking.

Irene Huerta, hunger strike mediator and wife of a hunger striker, condemned Governor Jerry Brown for his silence on the hunger strike, saying: “For Brown to say nothing at all, at such a critical moment, that is a slap in the face.  To say anything at all, even to speak against the strike, that’s one thing.  But to remain silent when people’s lives are on the line and their families are worried sick? There is nothing worse.”

Huerta’s husband, Gabriel, has been held in the SHU at Pelican Bay for 28 years. Gabriel had submitted testimony to the US Senate on his experience, writing: “It’s a sorry existence no matter how well you can endure it. I myself can, if I let myself, get lost in my own little world within the trunk of this car, reading my books and drinking my little pulque. I myself can, if I let myself, become “comfortably numb.”

Solitary Watch has also received updates on hunger strikers from the mothers of participants at Tehachapi and Pelican Bay who have visited or received letters from their sons, respectively.

A mother of a hunger strike participant at Tehachapi SHU reports that  her son resumed eating after 15 days. He “said that was the worst. Days without energy…dizzy, couldn’t function, blurry vision. I feel really ad for all the hunger strikers and their families.” She reports that her son “can now get a cup, bowl, shorts, and three shirts on special order.” Her son was given a 90 day extension on his SHU term.

A mother of a hunger strike participant at Pelican Bay’s Administrative Segregation unit reports that her son has lost at least 14 pounds. Her son, given a SHU term of 18 months for “a small piece of razor blade found in the trashcan in his cell” and thereby being charged “with a deadly weapon possession,” has since been issued a 115 rules violation report for his participation in the hunger strike. He will be assessed a 2-3 month extension on his SHU term. “When my son writes he purposely does not mention ‘hunger strike.’ I’ve sent him some news reports and talked about the rally’s that I’ve attended and some news updates but I don’t think he is getting them because he does not mention them in his letters,” she told Solitary Watch. This corroborates the claim by the mother of the Tehachapi participant, who also reported that “the prison is checking all mail to make sure no info on the hunger strike is getting out.”