The way we think about history is entirely wrong, says Howard W French at the start of this magnificent, powerful and absorbing book. The problem is not just that the people and cultures of Africa have been ignored and left to one side; rather, that they have been so miscast that the story of the global past has become part of a profound “mistelling”.

That process starts, argues French, with the age of discovery. The impetus for what turned into the creation of multiple European empires stretching across continents did not come from the “yearning for ties with Asia”, but from a “centuries-old desire to forge trading ties with legendarily rich Black societies” in Africa that were home to huge quantities of gold and an “inexhaustible source” of labour. It was along Africa’s western coast that Europeans “perfected techniques of map-making and navigation”, where ship designs were tested and improved and where sailors learned to understand the winds of the Atlantic Ocean.

These experiences, mainly dating to the 1400s, were to prove instrumental not only in the settling of the Americas and the opening up of new trade routes to Europe. As it turned out, the most important consequences were for the people of Africa. The scale of human suffering that followed Columbus’s crossing of the Atlantic is almost impossible to conceive, let alone describe: modern consensus is that around 12 million were put on slave ships in appalling conditions.

Most were then worked to death, the lifespan of trafficked people reckoned to be seven years or less. It was cheaper, wrote one English planter on Antigua in 1751, “to work slaves to the utmost, and by the little fare and hard usage, to wear them out before they become useless and unable to do service, and then to buy new ones to fill up their places”. Black lives literally did not matter – other than to make their “owners” rich. 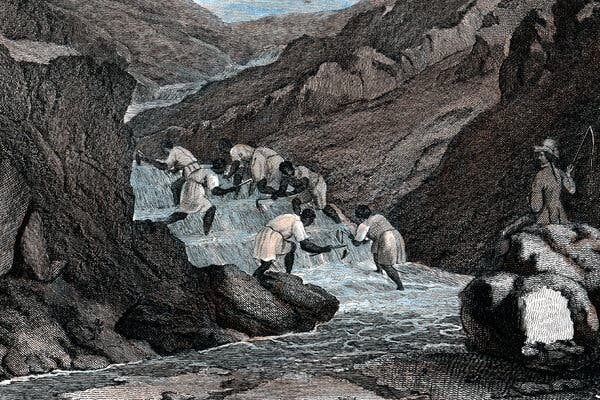 In 1444, the citizens of Lagos in southern Portugal witnessed a novel spectacle. As they crowded the beach, some 235 newly arrived Black captives were driven ashore. Overseers dragged families apart as despairing mothers clutched their children and threw themselves on the ground, absorbing the blows raining on their backs. Presiding from horseback over Europe’s first sizable market of sub-Saharan slaves was Portugal’s Prince Henry, known to history as “the Navigator,” and watching nearby was his official biographer, Gomes Eanes de Zurara. Abandoning his usual sycophancy in the face of the captives’ anguish, Zurara bitterly protested that he could not help but “cry piteously over their suffering” and found scant comfort in the thought that their heathen souls, if not their scarred bodies, would be saved.

As Howard French painfully establishes, the Portuguese would soon get used to such sights, and the slavers’ unholy swindle — a lifetime of hard labor in return for a shot at the afterlife — would be trundled out across four centuries to justify the shipment of 12.5 million Black bodies to the New World. In “Born in Blackness,” French’s design is not to elicit revulsion — though scenes of enslaved people feeding hellish sugar cane furnaces and slopping manure into dunging holes certainly do that — but to fill an Africa-size hole in conventional accounts of the Age of Discovery and the rise of the West.

In place of Spain and Columbus, French, a former Africa correspondent for The New York Times, proposes Portugal as the true engine of modernity through its deep involvement in sub-Saharan Africa. This may surprise some readers, since Portugal during this period is chiefly remembered for Vasco da Gama’s 1498 voyage around Africa to India. For much of the 15th century, though, Portugal had expended its scant resources on exploring the West African coast. Far from being a giant obstacle standing between Europe and the luxury goods of India and China, Africa had its own allurements, and foremost among them was gold.

Full article:  A History of Modernity That Puts Africa at Center Stage - The New Y...

Exposed: What's Going On In The Case Of Imam Jamil?

A FATWA CONCERNING PARTICIPATING IN KWANZAA

One Of Our Heros Sister Turquoise LeJeune Parker....