The Supreme Court added five new cases on Monday, including a case about wearing beards behind bars that resulted 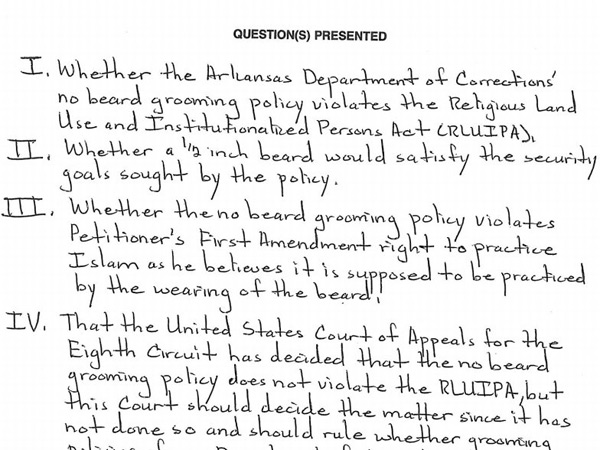 From the handwritten petition to the Supreme Court.

from a handwritten petition.

Gregory Holt, 38, sent the Court a 15-page publicly available form asking the nine Justices to accept his case. It wasn’t an ordinary note, since Holt had carefully researched his case in Arkansas, and he included numerous prior court cases in his argument. (See the complete handwritten petition here.)

Justice Samuel Alito received the handwritten form in his role overseeing petitions from the Eighth Circuit, and referred it to the entire Court.

Holt, also known as Abdul Malik Muhammad, is serving a life sentence for domestic violence and burglary, after he was convicted of cutting his girlfriend’s throat and stabbing her in the chest.

The Court previously blocked Arkansas from forcing Holt to shave the beard while his appeal was under consideration. The case will is scheduled for the Court’s next term, which starts in October 2014.

The case of Holt v. Hobbs is unusual in that Holt filled out a form and made his own petition to the Court, in a form called a writ of certiorari in forma pauperis, which allowed him to petition the court without paying fees.

In November 2013, the Court accepted Holt’s handwritten application for review, and the Court issued an injunction allowing Holt to keep his half-inch-long beard until it decided to accept his case. So now, Holt can retain his beard until a decision is made by the Justices after hearing arguments in the case.

Holt didn’t reply to the Court in further documents, with Douglas Laycock, a well-known legal professor, representing Holt in a petition reply.

In his original handwritten note, Holt asked the Court to take his case as a conflict under the Religious Land Use and Institutionalized Persons Act, and whether his prison’s no beard policy violates his First Amendment religious rights.

Holt also cited conflicting rulings in lower courts and said the Supreme Court had never decided the issue before.

Scott Bomboy is the editor in chief of the National Constitution Center. Arkansas department of Corrections
Gregory Houston Holt, an Arkansas prisoner who says he should be allowed to keep a beard on religious grounds.