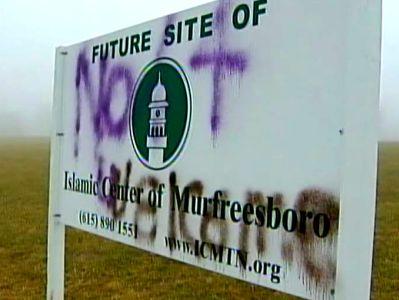 Department of Justice (DOJ) to protect the religious rights of Tennessee Muslims after a judge in that state blocked completion of a mosque that has been targeted by anti-Muslim bigots for the past two years.

The judge ruled today that proper public notice was not given for the May 2010 meeting that approved the site plan for the Islamic Center of Murfreesboro, near Murfreesboro, Tenn. He seemed to base his ruling on the fact that anti-Muslim bigots were able to manufacture a controversy over the construction of the mosque, the site of which has been the target of hate vandalism.

In his ruling, the judge used phrases and reasoning which could be viewed as indicating that a higher degree of public notice is required for issues related to Tennessee Muslims.

For example, the judge used language such as:

In his ruling, the judge did say the Rutherford County Planning Commission could approve the mosque site plan again.

"American Muslim constitutional rights should not be diminished merely because anti-Muslim bigots are able to manufacture a controversy about what would otherwise be normal religious activities," said CAIR Staff Attorney Gadeir Abbas. "If the Rutherford County Planning Commission does not immediately issue new permits for the mosque, we urge the Department of Justice to intervene in this case to support the religious rights of Tennessee Muslims."

He said the ruling would be similar to a judge in the 1950s blocking construction of an African-American church in a White neighborhood because of the "controversy" created by racists.

"The judge's ruling is apparently based on a fictitious 'heightened standard' for public notice when Muslims are involved," said Abbas.

[NOTE: In 2010, the DOJ was compelled to argue the basic premise that Islam is a religion in the lawsuit targeting construction of the Murfreesboro mosque.]

Abbas noted that an article published this morning in USA Today noted the growing opposition to mosques nationwide.

In that article, "Kevin Vodak, litigation director of the Chicago chapter of the Council on American-Islamic Relations, says a 2000 federal law meant to prevent zoning laws from discriminating against religious institutions is a potent tool. He cited the law -- the Religious Land Use and Institutionalized Persons Act -- in a pending federal lawsuit against DuPage County, Ill., for 'unlawful conduct and discriminatory practices' when it denied a permit for the Irshad Learning Center in 2010."

A number of recent reports have documented the growth and promotion of Islamophobia nationwide.