Al Farooq Masjid/Omar bin Abdul Aziz Masjid, A Message From The Board Of Trustees...

A Message from the Board of Trustees 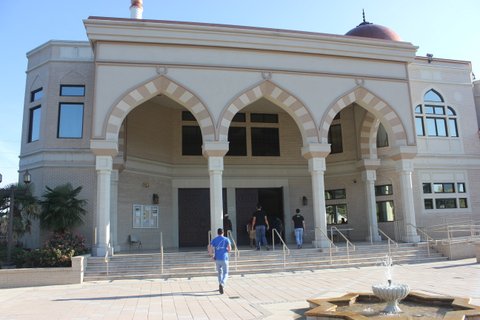 The Atlanta Mosque has strives to maintain a Board that promotes a culture that recognizes the evolution in time while still based on the understanding and interpretations of widely and globally accepted scholars of four juridical schools of Ahlul Sunnah wal Jama’ah.  In doing so, the Board of Trustees has included in it its board four community members to join our management team.  You can find additional details on current and new members on our Board of Trustees page.

Dr. Tomeh immigrated to the US in 1967 and is a long-time medical professional with expertise in pediatric infectious diseases.  He has held the Chair position at The Atlanta Mosque for the past 12 years and oversaw projects including the building of the new Al-Farooq Masjid facility, the Masjid Omar bin Abdul Aziz construction, renovations to Darul Uloom of Atlanta and the ongoing Youth Center.  During his tenure, he has made immense strides to solidify the presence of the Muslim community by opening channels of communication with both the public and private sectors.

Dr. Khalid has resided in Atlanta for the past 40 years and is a medical professional specializing in the field of endocrinology. He has served on the Board of Trustees for over 20 years and was the Chairman of the construction committee of the new Al-Farooq Masjid facility and is the Chair for the Gymnasium/Youth Center project.  He held the Executive Director position from 1980 to 2000 and has since been the Public Relations Director for the past 10 years, hosting thousands of visitors and helping new Muslims integrate into the community.  He established New Muslim Classes at Al-Farooq Masjid that occurs every Sunday and has gradually increased in attendance and curriculum, for both beginning and intermediate Muslims.  He was also one of the founding members of Masjid Omar bin Abdul Aziz, helping install the modular trailers and maintaining the landscape during his youthfulness.  He is also on the Board of Directors for the Faith Alliance of Metro Atlanta (FAMA).Board Member

Ajir Bilal is one of the original founders of The Atlanta Mosque (1977) and has been a Board Member since its inception.  He is a US Marine Corp veteran and freelance photographer and reporter with several blogs and websites, documenting Islam in America.  He was critical in negotiating the purchase of the original property at 442 14th Street, attending and meeting with the city officials to negotiate approval for zoning rights to establish the Masjid.  He also helped negotiate several land purchases, construction of the former Al-Farooq Masjid structure and the current Al-Farooq Masjid building. (Bio For Bilal Mahmud )

Aziz has served as a leader in different roles in Islamic institutions in Atlanta on and off for the past 30 years, include Al Madina Masjid board member, Assistant director of Masjid Omar for 2 years, Director of Masjid Omar for 13 years, Director for Darul Uloom for 11 years, board member of Al Farooq Masjid/Atlanta Mosque for 15 years, Director for Dar-Un-Noor school for 5 months, and an unofficial advisor for Islamic Center of North Fulton and Masjid al Momineen.   He is the CEO of Premier Petroleum Inc for 18 years, CEO of Fatima Investment Inc for 28 years and CEO for Dhanani Enterprises Inc for 5 years.

Faraz Iqbal was born and raised in NJ and moved to Atlanta in 2007.  He has a Bachelor’s degree from Pace University and an MBA from Fairfield University.  He is a Technology Executive with over 20 years of experience in Operations and Delivery.  He has been involved with various non-profit initiatives at the local and national levels with a focus on youth work for over 25 years.  He is a certified speaker of the Islamic Speakers Bureau of Atlanta and currently serves on the Board.  He is currently in the Leadership Atlanta class of 2020 and also a Charter member of OPEN Atlanta. Faraz has been involved with the inception and chartering of Young Muslims (YM) and has served as its Board Chairman. He has been teaching Middle School at the Roswell Community Masjids Islamic Studies Program for over 10 years and is a former Board Member.  He is married with 4 kids, 2 cats and lives in Tucker, Georgia.

Umber has lived in Atlanta for 18 years and have worked with various youth groups, Sunday and Summer School programs and community service activities.  She currently leads the Interfaith Committee at Madina Institute and is an active member of Gwinnett Interfaith Alliance.  She has also worked with entities outside of the Muslim community who advocate for minorities.

Khaldoun is a managing member of SHM, LLC which consists of SHM Landscape (residential landscape construction) and SHM Holdings (investment entity) and is also a licensed Georgia Real Estate Agent.  He lives by his life motto, Pray, Work, Bike.  He has previously held a Director at Large position within The Atlanta Mosque and is a liaison between management and the Feed the Hungry program.  He also implemented the ALFA Bike Ride program at Al Farooq and is a volunteer, brand ambassador and advisory committee member of IMAN ATL (Inner City Muslim Action Network).

The History Of Al Farooq