The Day of Arafah - An Opportunity . . . Not an Excuse

Fasting on the Day of Arafah – the 9th of Dhul-Hijjah:  An Opportunity . . . Not an Excuse 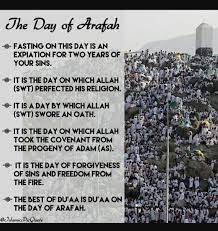 This time of year, some fortunate Muslims are on their way, or have already arrived to the holy places of Makkah or Madinah in preparation to begin the rites of the annual Hajj Pilgrimage.

The Hajj rites extend during a relatively short period – starting on the 8th of the Islamic month of Dhul-Hijjah and continuing to the 12th or13th.  During this period, the pilgrims complete a number of rites to commemorate theirsubmission Allah and the tradition of sacrifice of the Prophet Ibrahim (Abrahim) in direct obedience to Allah’s command.

There are many articles and discussions regarding the Hajj and its importance in Islamic life.  The most important day of the Hajj is the Day of Arafah, the 9th of Dhul Hijjah.  There the pilgrims stand on the plane of Arafah suplicating to Allah, seeking forgiveness and mercy.  The illustration at the left provides evidence on the value of the Day of Arafah.

For those who did not travel to Hajj, there are still blessings and favors in recognizing this blessed day.  Most importantly, 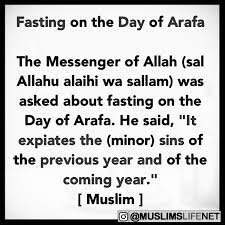 fasting on this day – according to an authentic Hadeeth of Allah’s Messenger, Muhammad, peace be upon him, is an expiation of sins from the past year as well as the year to come.

For a few hours in one blessed day, we have the opportunity to be forgiven our mistakes by Allah’s mercy.  Not only are our sins from the previous year forgiven, but Allah, in his mercy also forgives our sins yet to be commited during the following year.

One day . . . a few hours of fasting, praying, supplication, and seeking Allah’s pleasure, mercy and forgiveness . . . to grant us Allah’s favor from the past year and the year to come.

But this opportunity is not an excuse.

The relief and mercy that Allah may grant us through our fasting on Arafah day, is not an excuse or license to become trifling, or negligent during the coming months.  While Allah’s mercy may extend for the months to come, our consciousness of Allah’s awareness and His justice also extends throughout our live.

If anything, we have the opportunity even more to start with a renewed slate with our relationship with Allah, fellow Muslims, and the wider community of humanity.  The current times have caused strain due to the Covid-19 pandemic as well as numerous instances of oppression, brutality, fear, and suffering.

We, the Muslims have the opportunity to engage the world even more, not out of beligerence, but out of a sense of justice and truth, and not only against those who cause suffering against Muslims, but also in the face of our own communities, and communities who, though they might not share our faith, they share our humanity.