When Binyamin Netanyahu, Israel’s prime minister, visited Washington last week on the eve of the Purim holiday, he 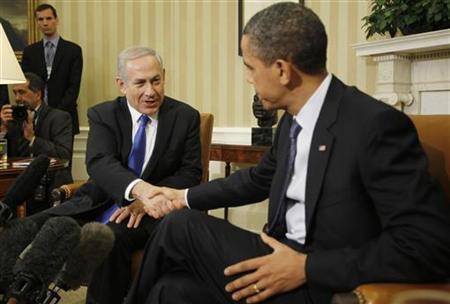 gave Barack Obama, the US president, what he considered a symbolic gift - a copy of the old testament book of Esther.

Netanyahu called it "background reading on Iran", since its story concerns relations with Jews in the Persian empire some 2,500 years ago.

It is considered by scholars to be mostly fiction, but for Netanyahu Esther represented justification for his stance against modern Iran.

”Israel must reserve the right to defend itself. And after all that’s the very purpose of the Jewish state. To restore to the Jewish people control over our destiny,” Netanyahu said.

But Netanyahu’s controversial reading of history, even his fight to preserve the state of Israel, are questioned by many of Judaism’s own religious authorities.

"This is against the will of the Almighty and this is not what it means to be a Jew," says Jewish religious scholar Rabbi Yisroel Dovid Weiss, a spokesman for "Jews against Zionism", who believes that Israel as a state is not legitimate. He says that Zionism has created "rivers of blood" and he opposes the occupation of Palestine.

On the threat from Iran and President Ahmadinejad he says: "He gives charity to Jewish communities and he says one thing: he has a problem with the oppression of the Palestinian people. And the words "wipe out" he constantly says that Iran doesn't have a history and he is not talking about harming anybody he says that God will not allow this crime to happen. We concur with him that Jews are in danger because there is Zionism because it says in the Tora if you rebel against God, it will not be successful and there will be catastrophic results and Zionism has brought catastrophic results and it could be much worse."

Today on Talk to Al Jazeera Weiss explains why Zionism and Judaism are not necessarily the same thing.