We Who So Loved Him... Comrade Chokwe Lumumba’

Like Malcolm before him, the full measure of the lessons of Chokwe Lumumba’s life and the weight of his

Writer and veteran activist Asha Bandeledares to put words to the depth of her adoration and respect for the late, Honorable Chokwe Lumumba

unexpected death on Tuesday, February 25th, will take years to unpack. This is the way it is with those who at great personal sacrifice see the empowerment of others—the most vulnerable and excoriated of others—as that which should be placed firmly in the center of all decisions taken. Chokwe’s final moniker before the world may have been mayor, but we who loved him understand that no one moniker could sum up a man who was, to paraphrase a friend, a movement in our lives.

At turns, Chokwe has been called the leader of the New Afrikan People’s Organization; co-founder of the Malcolm X Grassroots Movement; the People’s Attorney; Councilman; Mayor; and most importantly, husband, father and grandfather. An unceasing advocate for human rights, an attorney indefatigable in his pursuit of justice, a mentor, friend, husband and parent of the first order, Chokwe’s life was a demonstration of the best our African tradition has to offer.

RELATED: [IN MEMORIUM] WHO WAS CHOKWE LUMUMBA?

This child of Detroit, a brother to seven and boy whose consciousness was handed to him by a mother with a clear, witnessing eye, perhaps could best be summed up, if we must sum him up at all, as this: a committed solider of love who lived out the full meaning of the word excellence: excellence as a way of life and breath.

Still, he was not a God. He was man. He was great man. And surely a universe ahead of—and better than—many dishonest and vulgar examples of greatness we are force-fed daily online, in textbooks and otherwise. Chokwe’s life was a bulwark against those fallacies.

To know him was to enter a Blackdream state, where we were bound by ethics and mutuality. In his presence, the idea of being a Race Man or Woman wasn’t something you whispered, but shouted. In his presence, we could escape the deadly crosshairs of a world enslaved by its own narcissism and individual aggrandizement—money over everything.  In his presence we could love ourselves in the dimensional way were meant to be loved because that’s how he loved us.

And for at least that reason, I loved him. But there was more.

I loved Chokwe from the moment I met him nearly a quarter century ago. Barely into my 20s, and freshly separated from my first husband, I was in search of a way to understand a world that had been defined by loss, not only personally but the staggering number of deaths that were the norm then, living as we were in a nation that elected a president—Ronald Reagan—who began his campaign standing in the blood of Freedom Riders who’d been murdered in Philadelphia, Mississippi.

To know him was to enter a Blackdream state, where we were bound by ethics and mutuality.

It was the 1980s, and from Black Liberation Army soldiers to boys on the block, we were falling in rapid succession. And when we did survive, we were labeled super-predators and herded into prisons in numbers that we’re only now grappling with a generation on. We were being disappeared and save for Chokwe and the people he ran hard with from the New Afrikan People's Organization (NAPO) to the National Conference of Black Lawyers, no one was questioning what it meant to our communities, our spirits, that fathers and sons, mothers and daughters were just gone, baby gone. The Black body, never valued much beyond what it produced for the white imagination, seemed entirely expendable. Like many, I wanted to Fight the Power.

But as motivated as I was by a song—an anthem—we needed a plan to get out us of a Matrix-like existence where hedge-fund managers could prey like wolves while their very victims were called the thieves! Welfare queen was a common phrase. And even the most insistent hip-hop records couldn’t end the policies that concretized that lie. My generation was largely proclamation when what we needed was demonstration.

Which brings me back to why I loved Chokwe.  He was the demonstration, the general and the footsolider.  He showed us another world was possible and how we could create it.

Some of the deepest conversations we had were in 1992. He was defending another human rights attorney in a court battle and was staying with me in the Brooklyn apartment I shared with my sister and comrade, Monifa Bandele. He was exhausted but I was too young, too curious, too self-centered to be sensitive to that. I would launch into questions over our shared meal. And with a patience I’m still working to develop, Chokwe would answer me, slowly and deliberately, as was his way when he was not delivering a fiery speech calling for freedom for our political prisoners, justice for the Scott Sisters, economic rights for the poor.

It was in this way that I would learn what the face of commitment looked like, how the soul of it is shaped.  I learned that the real revolutionary is indeed guided by great feelings of love. Chokwe who worked harder than most people I’ve ever met, and with more effective results, showed me that love matters. “If you don’t love the people,” Chokwe taught us, “you will eventually betray the people.”  With him we learned love first, love in the middle, love last. 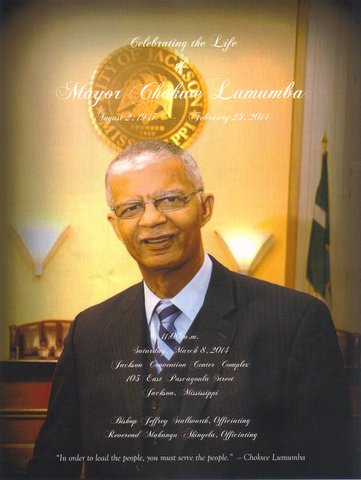 All of this is to say that Chokwe Lumumba made me a better woman.

And I want to offer the deepest political analysis, unlocking the questions that loom large, not the least of which is, what now for Jackson? Yet writing these words 36 hours after his death, I am too stunned to see far past my own pain. But what I do know is that if we are to truly honor Chokwe, we will choose to put others, starting with children, political prisoners and the poor, first, making the needs of the least of these central to every effort undertaken.

We will be willing to stretch ourselves for the reward that is not individually offered, but comes because a blow for freedom has been struck.

I don’t know that a day will come when we will not miss Chokwe.  We miss Malcolm and many of us weren’t even alive during his lifetime.  But in this hour of unspeakable pain, it may be good perhaps to simply say with all the conviction our collective hearts can muster that:

May he be welcomed as an Ancestor by his beloved wife, Nubia, whom we lost in June of 2003.

May his children Kambon, Rukia and Chokwe Antar find a comfort and peace in the love from all of us who benefited because they shared him with us so graciously and generously.

In our darkest hour, let us hold onto that.  Because what else?  And because Chokwe must be allowed rest knowing he did the work magnificently. And in his name, we will continue, magnificently, in the push for justice for those who are so deserving, those to whom Chokwe Lumumba—our Gifted Hunter—dedicated his life.

asha bandele has been a proud member of Malcolm X Grassroots Movement for 22 years.