First, Jumu'ah Mubaarak to all reading this email.  May Allah, The Merciful, The Compassionate, accept your Salah and Du'aa this day.  And may He, Ta'aalaa (The Most High), make this day the beginning of a "new life" for our community.  We are taught to turn to Him, especially on this day with a repenting heart and soul; a thankful, grateful, mindful-presence; and an honest awakening and evaluation of our past, present, and hopeful future.  This is the day - a very blessed day - wherein hope defeats pessimism; forgiveness trumps revenge; and consciousness defeats slumber.  This is the aim of Al-Jumu'ah for Allah's devout subjects and servants.

Second, one of the cardinal things we are taught in Islam is "Adl."  Adl means justice and fairness without discrimination, prejudice, or preference to one's status, title, or position. The Quran mentions Adl (justice) in one or more ayaat (verses) referencing it as a virtuous means of gaining access to Taqwaa (being mindful and protective of Allah's retributive prerogative).  He, Allah Almighty orders: "...be just!  It is closer to the requirements and demands of Taqwaa...."

Third, while writing this communication, trouble is brewing in Baltimore, Maryland.  A young man, Mr. Freddie Gray, who was arrested (for no legitimate reason) by local police officers nearly three weeks ago has died (seemingly killed) under very suspicious circumstances.  The "police investigation" of their own buddy-officers is once again pointing in the same direction as thousands of previous deadly cases: "The police acted within the law; they did nothing wrong or illegal; the apprehended person - criminal - caused his own death resulting from a self-inflicted injury; or he or she was worthy of being killed (very often over-killed after being shot 5, 10, 15, 25, 40, or 60 times!) by the police; and/or some other very nonsensical, irrational, baloney-smelling excuse to cover their you know what!"  Unfortunately, the Muslim community - by and large - has once again gone AWOL (absent without "moral authority leave") on this social issue despite the voluminous instructions and imperatives we have about divine justice (Adl); blind justice towards any and all humanity that must be upheld, promoted, and protected come what may.  It would have been nice if rank and file Muslims joined in the "oppressed people's protest demonstrations" in Baltimore for at least for one day; one evening; one moment. The grieving parents of Mr. Gray, his relatives, his friends, and general community members who have been raising their voices and fists in protest throughout the past few weeks, would have been inspired by our - the Muslim community collective presence - at the rallies, protests, and demonstrations.  Our collective presence - men, women, and children - would have a sent a loud and clear message to everyone present: Muslims care about justice.  Muslims care about people other than just their own.  Muslims have a sense of right and wrong.  Muslims actively participate in important social issues like racism, police brutality, and repression.  Muslims are a trusted ally and friend during trying times. In turn, such a selfless presence (we should be present as a matter of principle not as opportunists) by the Muslim community would have potentially garnered support from others - non Muslims others.  Their support would no doubt be forthcoming as we face and continue to face critical issues of social, economic, and political injustice here and abroad.  Once again, we missed the responsibility boat, but it isn't too late to take a public stand on this troubling issue which is symbolic of many illegal acts by authority figures against innocent people all throughout this country.  Fortunately, some of these brutal, wicked acts have been filmed and recorded by the public for public scrutiny.  What now remains is the people's will (independent minded, hands-free, justice-seeking, uncompromising, intelligent people) to make something useful happen (a total revision of the archaic, privileged laws that protect authority personnel, while violating the human rights of citizens) that will end government abuse, lies, deception, framing, incarceration, brutality, and often death, against innocent, defenseless people.  Who gave any government the right and authority to make us suffer - robbing us of our collective freedom, honor, and dignity?

Finally, I humbly suggest you to listen to Dr. Tariq Ramadan's insightful lecture which can be found on YouTube.  It's entitled: "lecture about justice in Islam."  Kindly listen to it if you have time and interest.  It will add more meaning and perspective to this contemporary issue - the subsequent death of an innocent man and others while in police pursuit or custody - far beyond anything I might express.  The time is ripe for justice to raise its dignified head from this drowning sea of unfairness and abuse.  We, the people, and especially the Muslim community, must be at the forefront of this social justice upsurge.  We are not allowed or permitted to surrender this responsibility to others, hoping and praying that they will do what Allah (Al-Adl) has commanded, while at the same time, they are unfamiliar with Who He actually is and what He demands from people.  Upholding the standards of justice belongs with us, for us, by us, and to us.

Allah, The Almighty, The Supreme, loves justice with a passion beyond calculation or measure.  We too must learn to love and practice justice beyond measure or calculation, as much as we can.

All the best.  May Allah, Al-Sabr, Al-Jaleel, remain with and for us during this blessed day of Al-Jumu'ah Al-Mubaaarak! 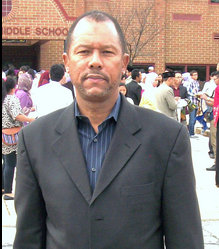