"If water derives lucidity from stillness, how much more the faculties of the mind! The mind of the sage, being in 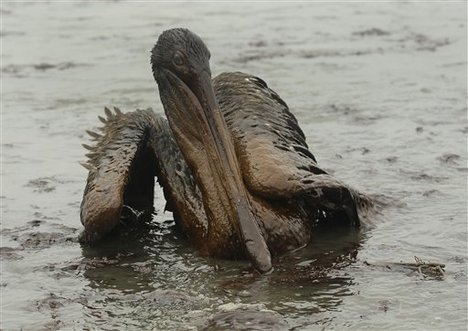 repose, becomes the mirror of the universe, the speculum of all creation.” -Chuang Tzu

A recent report issued by scientists detailing their fears over BP’s massive oil spill, including its contamination in the deep waters of the Gulf of Mexico, brought to mind the story of Chuang Tzu and the Sacred Turtle. Chuang Tzu was fishing in the P’u when the prince sent two high officials to ask him to take charge of the administration of the Ch’u State. Chuang Tzu went on fishing, and without turning his head said, “I have heard that in Ch’u there is a sacred turtle which has been dead now some three thousand years. And that the prince keeps this turtle carefully enclosed in a chest on the alter of his ancestral people. Now would this turtle rather be dead and have its remains venerated, or be alive and wagging its tail in the mud? “It would rather be alive,” replied the two officials, “and wagging its tail in the mud.” “Begone!” cried Chuang Tzu. “I too will wag my tail in the mud.”(1)

In order for modern man to think of himself as Master of the Universe, he must live with illusions. Even more tragic, is for modern capitalist-man who believes he is Master of the Universe and tries to create a new world based on profit and loss, success and disaster, wealth and poverty, humankind and nature. This kind of irrational belief and absurd hope adheres to the myth that, and according to Protagoras, “Man is the measure of all things.” But man is not the measure of all things, nor is his governments and economic systems. The paradox of capitalistic modernity and technocratic societies is that man experiences less freedom, less security, and less harmony with humanity and the Universe. It is also why the BP oil spill occurred and the reason contamination from sunken oil is covering patches of the sea floor. As black toxic blankets smother the ecosystem and threaten the delicate balance of the Universe, man has again caused unbalanced and chaos. Meanwhile, dead marine life continues to float to the top of the Gulf of Mexico.

Chuang Tzu lived a Chinese philosophical and religious system that was based on the search for harmony with the forces of the Universe. Daoism and Taoism, as they are known, are translated as the “the Way” or “the Path.” The Way expresses itself being infinite but not eternal. It is invisible and intangible. By it, all things came into being and it does not reject them, yet it does not claim master over them. Taoism stresses spiritual liberation through inner reflection and through observation of the natural world. It is nonhierarchical and a classless social philosophy that emphasizes “wu-wei,” or non-action and non-doing. Central to Taoism is the Yin and Yang which are polar forces of the universe that create unity and balance out of conflict. In seeking universal harmony with humanity and nature, Taoism also concerns itself with healing, hygiene and alchemy.(2) The Way seeks simplicity and tranquility an a way of being one with the Universe.

Perhaps deep down, modern mankind hates, or has learned to hate, the natural world, for it is the one thing he cannot control and be master of, and it is the one thing that will cause his undoing. For in the end, mankind will never be able to decide his ultimate fate and reality. Only the Earth and Universe and the Way, with their infinite forces, possibilities and chances, can do that. In the end, the Earth and the Universe will decide when mankind will end, when there will be no more life and mankind’s constructed realities. When this happens, sacred turtles will no longer be sacred. Instead, they will return to their natural surroundings in the universe. Oil spills and other manmade capitalistic and technocratic disasters too, whether ecological or geological, will no longer occur. Most important, though, never again will mankind leave any traces. The unnatural will become the natural, like water that does not resist but yields to outside pressure and yet is an unstoppable force.

Still, governments and capitalistic systems, which are the cause of many problems mainly due to those in authority and those who are too fond of action or love wealth and power too much, will also cease. Of all the creatures of nature, only humans fail the Universal test, or the Way. In arguing about questions of right and wrong, good and evil, and what is holy and unholy, mankind forgets about knowledge and understanding and above all, about nature. Nothing in nature strives for fame, power, or wealth. Is it not much better to be alive and happy and wagging a tail, than to have been dead thousands of years and venerated in a chest on an alter? Is it not much better to be fishing beside a river and observing the Way, than sitting on a throne and ordering the mass extinction of life that now lies under a blanket of manmade toxic sludge?

Where there is illusion, there will also be delusion, or a persistent false belief even when it contradicts itself. The manmade BP oil disaster is not only symbolic of this truth, but it is symptomatic of it too. It is a monument of mankind’s attempt to conquer and be Master of the Earth and Universe, including Nature. This delusion will more than likely upset the delicate balance of the Ying and Yang, leading to mankind’s extinction long before the appointed time. Ultimately, mankind will never decide what is real and what is final. Nor will mankind ever be able to impose its own reality or its own way. Sadly, mankind will continue on its own destructive path, instead of embracing the Way and instead of accepting wu-wei, or reality as it is. Sacred turtles in the water know this all too well.

(Dallas Darling is the author of Politics 501: An A-Z Reading on Conscientious Political Thought and Action, Some Nations Above God: 52 Weekly Reflections On Modern-Day Imperialism, Militarism, And Consumerism in the Context of John‘s Apocalyptic Vision, and The Other Side Of Christianity: Reflections on Faith, Politics, Spirituality, History, and Peace. He is a correspondent for www.worldnews.com. You can read more of Dallas’ writings at www.beverlydarling.com and wn.com//dallasdarling.)