The Liberation of Libya: Death of a Nation

The Liberation of Libya:

Death of a Nation 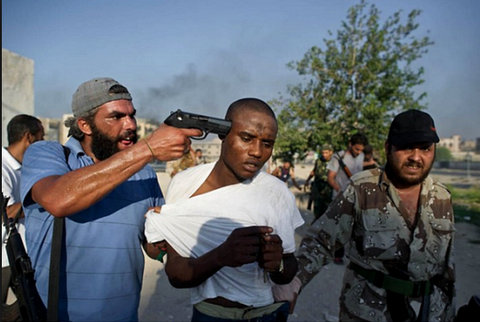 Much of the world was aghast as CNN broadcast the gruesome images of Black Africans being bound and tethered like animals being prepared for sale in some stockyard bustling with anxious potential buyers. But, the fact that these markets in the former Italian colony of Libya were auctioning human beings to be enslaved in 2017 rather than camels or goats for domestication made the broadcast images more harrowing to focus on. The assault on one’s emotions continued as scenes of frightened captive men, and fewer visible women and children, were terrorized by goons wielding guns, sticks, batons, and even machetes against the bodies of these bound captives. As if media-captured scenes of flesh peddling were not revolting enough to jar human sensibilities, some former captives related that their organs had been harvested, against their will and with little to no regard for sanitary conditions or anesthesia. Libya has become the major transit point for illegal immigrants trying to flee griping poverty in their home countries such as Nigeria, Gambia, Ghana and Ethiopia. Even though over 3,000 Africans have perished each year since 2013 in the journey to Europe to pursue a better life, according to the UN agency International Organization for Migration, thousands continue to embark on this perilous trek. After arriving in the North African nation, migrants are crammed into detention centers that are grossly over-crowded that, as reported by a recent United Nations report, are festering grounds for robberies, rape, and murder.

Against this backdrop of targeted cruelty, though, lay an equally insidious display of suffering. In 2011, NATO forces, in conjunction with strategic and intelligence support, and naval missiles from the United States, carpet bombed thousands of innocent Libyans in a concerted effort to defeat the Libyan military and remove the longest, continuously-reigning leader on the African continent, Muammar Qadhafi. In the aftermath of NATO’s unrelenting aerial assault, government buildings, residents’ housing, infrastructures of the capital city, Tripoli, Benghazi, Sirte, and other population centers suffered near-total devastation. Libya’s sophisticated desalinization system, high-tech, elaborate irrigation network, extensive telecommunications and transportation systems were reduced to rubble by the constant bombardment of the country by NATO. Colonel Qadhafi led the Free Officers Movement in the September 1, 1969 ouster of Libyan King Idris. King Idris ruled Libya from the time the nation received its independence in 1951 to his 1969 overthrow. In 1951, Libya was deemed the poorest nation in the world. Six major oil fields were discovered in the country in 1959 with 40 countries given concession contracts to drill and explore for the precious crude. At the time of NATO’s destruction of Libya and the subsequent capture and murder of Qadhafi in the streets by Libyan rebels, Libyan crude was highly valued because of its unusually low sulfur content. Ninety percent of Libya’s oil was sold to Europe, a fact not wasted on political observers who contend that NATO’s Libyan campaign was more about securing the sweet Libyan crude for European oil oligarchs than removing a declared dictator. Muammar Qadhafi was considered a political pariah and terrorism supporter by most Western governments during his 42-year rule in Libya. But, to most African, Latin American, and Asian liberation movements and countries attempting to throw off the yoke of colonialism and neo-colonialism during his rule, Qadhafi represented a valued financial  and ideological supporter of their political ideals. To many Libyans, Qadhafi was a brutal dictator who abused his power while entrenching his family members and loyalists in power. Other Libyans choose to emphasize the fact that during his rule, Libya had the highest standard of living in Africa, that before Qadhafi, Libya’s literacy rate was 20 percent and under his rule literacy rose to 83 percent of the population, that health care was free and of high quality to every country resident, that housing was considered a human right, that electricity was free, that newly married couples received $50,000 from the government, that the government paid 50 percent of the cost of automobiles for any Libyan, that the government provided free secondary and college education, and that Black Africans were given positions of responsibility in all sectors of Libyan society.

Shortly after Qadhafi’s extrajudicial execution, freelance and mainstream journalists from around the world began reporting that Black Libyans and Black migrants from sub-Saharan countries were being summarily dismissed from their jobs, harassed, beaten, and even killed by mob violence. NPR’s West African reporter was told by a Turkish oil worker in 2011 that, “We left behind our friends from Chad. We left behind their bodies. We had 70 or 80 people from Chad working for our company. They (Libyan rebels) cut them dead with pruning shears and axes, attacking them, saying you’re providing troops for Qadhafi. The Sudanese, the Chadians were massacred. We saw it ourselves.” One of the ironies of the “liberation” of Libya by rebels is that many of these same rebels hunted down, lynched, and even massacred Black Africans across Libya, many of whom had been living in the country for decades. Libya provides such a paradox to the narrative of liberation politics that a superficial discussion of the causes for Libya’s “Liberation” are by necessity insufficient. In a poignant essay written by Mahdi Darius Nazemroaya, entitled “The Racialization of the War: Libya and the ‘Clash of Civilizations,’” found in the book “The Illegal War on Libya,” edited by Cynthia McKinney, Nazemroaya writes,” “In the eyes of NATO and the so-called West, Libya’s crime was how it distributed and used its wealth, its lack of external debts, and the key role it was attempting to play in continental development and curtailing of external influence in Africa. Tripoli was a spoiler that effectively undermined the interests of the former colonial powers. The Jamahriya (Libya) had taken on some hefty pan-African development plans intended to industrialize Africa and transform it into an integrated and assertive political entity. These initiatives conflicted with the interests of the external powers competing with one another in Africa, but it was especially unacceptable to Washington and the major EU countries. Accordingly, Libya had to be crippled and neutralized as an entity supportive of African progress and pan-African unity…”

Racism is a virulent cancer that sometimes masquerades as patriotism. Appeals to racist sentiments while attempting to stoke the fires of nationalism and patriotism are eventually proved to be counterproductive. Libya became a failed state while the non-Western whole world was watching and doing nothing. If events in Libya during the first quarter of the 21st century were a cautionary tale play, it could be appropriately called “Death of a Nation.”