The Closing of the Right's Mind

FLORENCE, Italy — The longstanding link between the political right and various Christian churches is breaking down 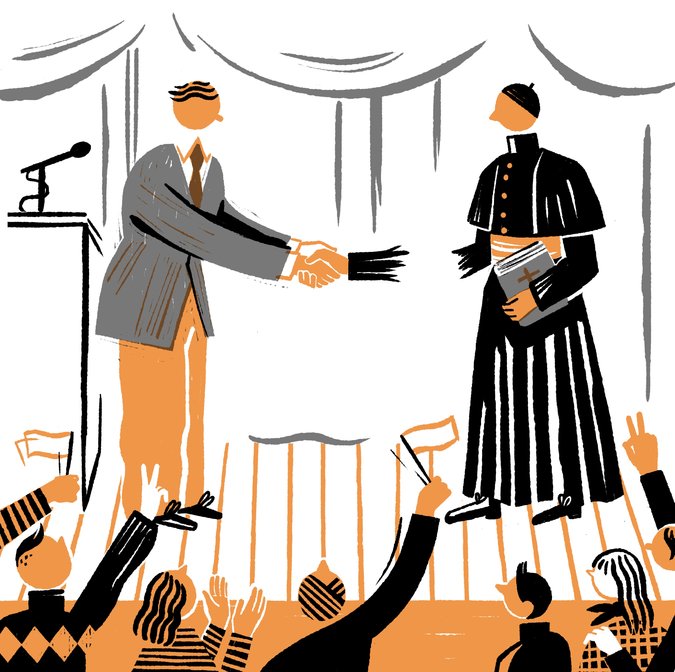 across Europe. This is largely because the right, like much of European society, has become more secular. Yet this hardly indicates progress: Animated by an anti-Islamic sentiment, the right’s position is endangering freedom of religion, as well as secularism and basic democratic traditions.

Up to the 1950s, the cultural values endorsed by the right throughout much of Europe were not so different from the traditional religious values of Catholics and Protestants. Homosexuality was criminalized in many countries. Children born out of wedlock had fewer rights than “legitimate” children. The law in most countries protected family values, censored some forms of pornography and condemned what the French call mauvaises moeurs (roughly, loose morals).

Then came the 1960s. The cultural revolution engulfed European societies with new values: sexual freedom (which entailed distinguishing sexuality from procreation), women’s rights (including the right to abortion), and gay rights (most recently, gay marriage). At first these views were seen to be the exclusive purview of the political left, but in the intervening years they have become mainstream.

Today, even conservative parties subscribe to them. If conservative voters, especially in Southern Europe, remain widely homophobic, they no longer reject feminism or some gay rights. Prominent members of Britain’s Conservative Party have endorsed same-sex marriage; France’s Union for a Popular Movement and Germany’s Christian Democratic Union still oppose it, but support for gay rights has clearly increased among their supporters. The governing parties in Italy, Germany, Britain and Poland have distanced themselves from the dominant churches in these countries.

Even the populist parties — which often challenge mainstream conservative ones on issues like immigration and the European Union — follow the same trend. The Progress Party in Norway and the Freedom Party in the Netherlands explicitly defend gay rights. In France, the National Front has softened its stance on abortion. The U.K. Independence Party has declared that it favors broadening the civil partnership, “awarding it equal status to marriage and enabling it to be available to all.”

All this might look like evidence of a general march toward liberalism, only there’s a twist: Even as the right moves away from the basic values of the Catholic Church and many Protestant denominations, it clamors that Europe is fundamentally Christian. In 2003 many members of the European People’s Party, the center-right coalition in the European Parliament, lobbied for amending the preamble of the European Constitution so that it would say as much. Chancellor Angela Merkel of Germany has referred to Europe’s Christianness. And at the same time that Prime Minister David Cameron of Britain has argued “I believe we should be more confident about our status as a Christian country,” he has backed holding same-sex weddings in places of worship.

Such positions would seem to expose a curious contradiction — but only until one considers these parties’ purpose: The European right is advocating a Christian identity for Europe not because it wants to promote Christianity but because it wants to push back against Islam and the integration of Muslims — or what the National Front calls “the Islamization of Europe.”

Public spaces have become a major battleground. There are bans on “head scarves and other signs of religious affiliation” in schools (in France) and on full-face veils on the streets (in France and Belgium), and efforts to block the construction of mosques (throughout Europe) or just minarets (in Switzerland, mosques are allowed but without their distinctive towers, the latter being considered the “expression of an intolerant culture”). The pushback against Islam also concerns the individual body, with, for example, campaigns to prohibit circumcision and halal food in Norway.

Notably, these measures are being advocated in the name of protecting not Christianity but liberal secularism. The hijab is said to offend women’s rights; circumcision, children’s rights; ritual slaughter, animal rights. Oriana Fallaci and Ayaan Hirsi Ali, two radical spokespersons for the feminist resistance to Islam, became darlings of the conservative right in Italy (Fallaci) and the Netherlands and America (Hirsi Ali).

This anti-Islam rhetoric is spreading to the mainstream. The coalition government of the Netherlands requires would-be immigrants to accept progressive values before they are given a residency visa. Applicants are asked whether they tolerate the mixing of boys and girls in school, gender equality, nudity in public and gay rights. Although all applicants must take these tests, given the concerns revealed in these questions and the demographics of migration into Europe, there can be little doubt that the exams are designed to challenge adherents to Islam. Such measures are unfair to Muslims, and they violate European states’ professed commitment to multiculturalism and the separation of church and state.

What’s more, prohibitions like those on circumcision and the ritual slaughter of cattle also amount to attacks on Judaism. In France Marine Le Pen of the National Front has called for banning both the hijab and the kippah (but not the priest’s cassock) in public places. In this respect, the defense of Europe’s Christian identity is taking on an especially ugly quality: It echoes the anti-Semitic regulations of Nazi Germany and other European countries in the 1930s. So much for the Judeo-Christian roots of European culture; once again, the Jews of Europe are made to feel like foreigners.

It was only logical, if also paradoxical, then, that Jewish groups would build coalitions with Muslims. In Germany in 2012, the Jewish community rallied around the case of a Muslim family whose son’s botched circumcision became the basis for a local court to declare all circumcision unlawful. Last month the chairman of Shechita-U.K. and the deputy secretary general of the Muslim Council of Britain signed an open letter to The Daily Telegraph defending ritual slaughtering. Religious minorities that may otherwise be wary of one another are joining forces.

Will the Catholic and Protestant churches do the same? After all, since the political right’s onslaught against Islam manifests itself mostly through an aggressive form of secularism, they are collateral victims as well. The French law banning the hijab forbids all “ostentatious” religious symbols (this, in order to not seem baldly discriminatory). In Britain a 17th-century law penalizing blasphemy against Christianity was repealed in 2008 after a heated debate about whether it could be used against Salman Rushdie, the author of “The Satanic Verses.”

The political right’s dual move — claiming the mantle of Christianity but not its values — is a threat to Christianity as radical as it is indirect: It risks stripping the religion of its spirituality. In 2004 after protracted appeals in the Ludin case, which concerned the right of a Muslim teacher to wear a head scarf in school, the government of the German state of Baden-Württemberg enacted a law that banned teachers from displaying religious signs except for the “exhibition of Christian and Occidental educational and cultural values or traditions.” The same reasoning runs through the European Court of Human Rights decision authorizing the display of the crucifix in Italian schools on the grounds that it is a “historical and cultural symbol” more than the expression of any specific belief. But to defend a distinct cultural Christian identity is to secularize Christianity itself.

So far, the Christian churches have contributed to the problem. By failing to clearly distance themselves from the cultural ultranationalist right-wing parties that have co-opted the Christian idea of Europe to block the integration of Muslims, they have enabled more secularization still, as well as allowed the betrayal of religious values in the name of xenophobia.

In 2009 Cardinal Christoph Schönborn, the archbishop of Vienna, rightly criticized the populist Freedom Party of Austria for using the cross on its electoral posters: He argued that it was proffering the symbol against other religions rather than to express Feindesliebe, love for one’s enemies. Like Mr. Schönborn, the churches of Europe should reassert the fundamental values of their religions. Going beyond him, they should try to build a vast coalition with Muslims and Jews to promote the free exercise of religion, any religion.

The case for freedom of religion is but one aspect of the classic case for democratic freedom for all, believers and nonbelievers alike — thus, even secularists should subscribe to it. The abuse of secularism by the right-wing parties of Europe to exclude Muslims is fundamentally undemocratic. It is an attack not just on Islam, and all religions, but also on freedom itself.

Olivier Roy, the author of “Holy Ignorance: When Religion and Culture Part Ways,” heads ReligioWest, a project at the European University Institute in Florence that studies religious changes in the West.