The Civil Rights Movement and the Black Liberation Struggle, and the Muslim influences and involvements...

Join the Islamic Speakers Bureau of Atlanta at the Center for Civil and Human Rights on September 13, 2015, at 2:00 PM 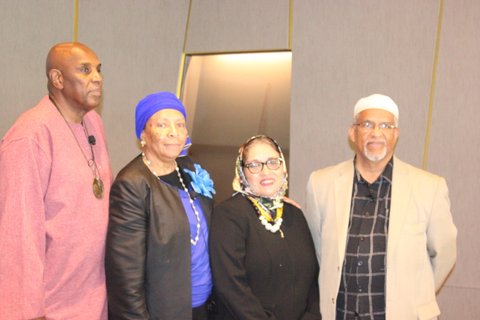 Ms. Soumaya Khalifa, Executive Director and founder of the Islamic Speakers Bureau of Atlanta, will be the moderator of this event; joining her will be Ms. Saffiyah Shahid, Former Director and Principal of Mohammed Schools of Atlanta; Imam Plemon El-Amin, Imam Emeritus of the Atlanta Masjid of Al-Islam, one of the largest and most progressive mosques in the U.S.; and, Dr. Gerald Durley a veteran of the civil rights movement and former pastor of the historic Providence Missionary Baptist Church in Atlanta.
Our distinguished panel will discuss the often overlooked and understated relationship between the Civil Rights Movement and the Black Liberation Struggle, and the Muslim influences and involvements within each. They will examine and explore the philosophical, cultural, and programmatic impact derived from Muslim leaders, writers, and activists, as well as the Islamic connections to the anti-colonial, Pan-African, and international liberation movements of that era. Our featured panelists will also consider the possible influences, challenges, and opportunities of that legacy within today's global polemics.