The Bushtonian Court and America's Captivity

"Here reign the successors of the poor fishermen of Galilee," Petrarch mockingly wrote, "they have strangely forgotten 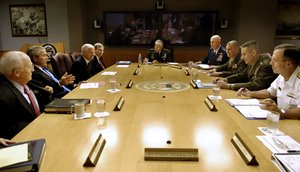 their origin."(1) What prompted Petrarch's memorable and philosophical critique was a seventy-year "spiritual" coup led by King Philip IV of France. Since the Church administered the sacraments of God's grace and served as the true guardians of salvation during the Middle Ages, whoever controlled and dominated the papacy controlled the people. When King Philip moved the seat of the papacy from Rome to the southern French town of Avignon, it was just one of many conflicts that for centuries had existed between the State and Church. All of the papal bulls issued, the debates over lay investiture and excommunications, and the Concordant of Worms, were, in the end, always about who alone could grant the ring and staff, and who would wield the most powerful spiritual and physical swords within the Holy Roman Empire.

But the papal court in Avignon, known in papal history as the Babylonian Captivity, was only interested in comfort, wealth, and power. In time, it became more luxurious than any of the secular courts of Europe. It also became more threatening and sinister. Petrarch chided the court exclaiming, "I am astounded, as I recall their predecessors, to see these men loaded with gold and clad in purple, boasting of the spoils of princes and nations; to see luxurious palaces and heights crowned with fortifications, instead of a boat turned downwards for shelter." He sadly concluded, "We no longer find the simple nets which were once used to gain a frugal sustenance from the Lake of Galilee, and with which, having labored all night and caught nothing, they took, at day break, a multitude of fishes, in the name of Jesus...One is stupefied nowadays to hear the lying tongues...turned into nets which are used, in Christ's name, to catch hordes of unwary Christians."(2)

Using the name of Jesus, the Church, and Christianity, President George W. Bush boasted of wealth and power too, especially military power. Instead of holy solitude, we were ruled by the Bushtonian Court, with its rich oil men from Texas and Wyoming, catering to criminal hosts of the most infamous hangers-on. Instead of soberness, depraved banquets; instead of pious pilgrimages, abnormal and foul sloth; instead of the bare feet of the apostles, the snowy coursers of brigands flew past us, the tanks and fighter jets decked in gold and fed on oil, soon to be shod with pure flesh and blood (and oil). We seemed to be among great warrior kings, before whom we fell down and worshipped, and whom we could not approach except with expensive presents and gifts to offer, including our own lives and our own futures. "O, ye unkempt and emaciated old men, is it for this you labored? Is it for this that you have sown the field of the Lord and watered it with the holy blood of the people of Afghanistan, Iraq, and America?"(3)

Try to remain strong in the face of intolerance and violence brought on by the Bushtonian Court. Try to resist its ongoing and perpetual wars of extremism and its brand of militant fundamentalism imposed on the rest of the world. By the rivers of Washington and the Pentagon, sit down and weep. The sun, in its travels sees nothing more hideous than this place on the shores of the Potomac, which suggests the hellish streams of Cocytus and Acheron (the rivers of Hades). Pray for the Christians in Iraq, Afghanistan, and Egypt, and their Exodus in the Middle East. But always remember this about the Bushtonian Court and America's Captivity, including its foreign and domestic preemptive wars and military occupations and shock and awe campaigns: They help in no way toward a happy life, for what does it advantage us to be familiar with the nature of war and killing and nuclear weapons; while we are ignorant of the nature of the race of man to which we belong, and do not know or care whence we come or whither we go?(4)

And these fish, these unwary Christians, are still dressed and laid on the burning coals of anxiety before they fill the insatiable maw of the their captors.(5)