DAMASCUS - A young Syrian blogger sentenced to five years in jail, Tal al-Mallouhi, worked for the US spy agency

Syria's Tal al-Mallouhi - held since December 2009 - convicted for passing on secrets to US. 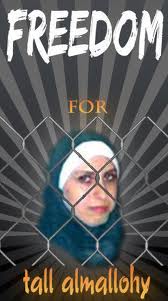 Held since December 2009, Mallouhi was convicted on Monday for passing on secrets to the United States, Syrian rights groups said.

"We are aware of the protests and we wish to explain the sentence," foreign ministry spokeswoman Bushra Kanafani told a press conference, referring to reactions in the West at the verdict.

"At the age of 15, she was recruited by an Austrian officer of UNDOF (the United Nations observer force in the Golan) who asked her to move with her family to Cairo," where they arrived in September 2006, she said.

In the Egyptian capital, an American spy had introduced Mallouhi to diplomats at the US embassy who allegedly asked her to find information on the work of Syria's mission in Cairo.

The young Syrian was later asked to return to her home country and to dig up details on political prisoners while cultivating ties with security agents and officials, according to Kanafani.

Last October, Syria's Al-Watan newspaper reported that Mallouhi, a high school student at the time of her arrest, was being accused of spying for the US embassy in Egypt.

Washington has denied the charge and called for her "immediate release" while condemning what it called her "secret trial."

"We call on the Syrian government to immediately release all its prisoners of conscience and allow its citizens freedom to exercise their universal rights of expression and association," the State Department said.

Security services seized her home computer, CDs and books, HRW said, although her blog, which contains poetry and social commentary, focused on the plight of the Palestinians and did not address Syrian politics.

Syrian rights groups said in late November that Mallouhi was questioned on November 10 by a state security court and returned to a women's prison in Duma, near Damascus.