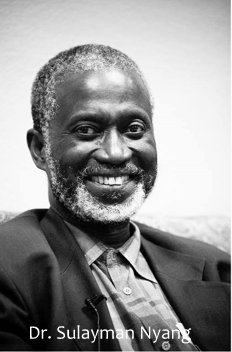 Dr. Sulayman Nyang, an icon in the American Muslim community, transitioned to Allah
on Monday, November 12, 2018. From Gambia, West Africa, Dr. Nyang faithfully served
the Muslim community in the United States for over 50 years as an academic, prolific
writer, lecturer, advisor, motivator, and friend. He was a transcendent figure whose
influence reached far beyond the halls of academia touching the lives of countless
human beings of all races, ethnicities, religions, and socio-economic classes. His humble
persona masked a brilliant analytical mind that equipped him with the prerequisite
skills to enhance the understanding of Islam and Muslims by intellectuals or the
common man and woman.
Dr. Nyang served as the Chair of the African Studies Department at Howard University
in Washington, DC where he taught numerous courses on African history and issues
impacting the continent. A brilliant community organizer and networker, Aliyah Abdul
Karim, first told me about Dr. Nyang and in her signature way, ordered me to meet him
as soon as possible. Hodari Ali, a San Diego, California transplant who was a Howard
University graduate, entrepreneur, and well-known activist in Washington, DC, first
introduced me to Dr. Nyang. Hodari insisted that I meet “one of the most
knowledgeable persons about Africans throughout the Diaspora” that he had ever
encountered. Although my first encounter with Dr. Nyang was anything but spectacular,
I came away from our introductory meeting feeling impressed by his information-laden
conversation and humility.
After moving back home to North Carolina, I felt compelled to visit Dr. Nyang’s office
whenever I returned to Washington, DC. Dr. Nyang was a motivator of people, and as a
result, I always felt inspired to maximize my service to others after each conversation
with him. I rarely have, if at all, heard Dr. Nyang complain about any discomfort or issue
affecting his well being. His smile was so infectious that he lifted your spirits just by
looking at his countenance. In recent years, health issues slightly challenged Dr. Nyang’s

traveling capacity. It was not uncommon though to learn of his hospitalization during
the week only to see him speaking at a convention on that same weekend.
Dr. Sulayman Nyang’s departure from this world leaves a void in the Muslim that can
only be filled by the memory of his legacy of tireless work on behalf of the Muslim
community and humanity. His janazah prayers will be held at…

When Legends and Reality Collide: The Extraordinary Life of Dr. Sulayman Nyang

Bilal Mahmud Is A Member Of The Atlanta Associati