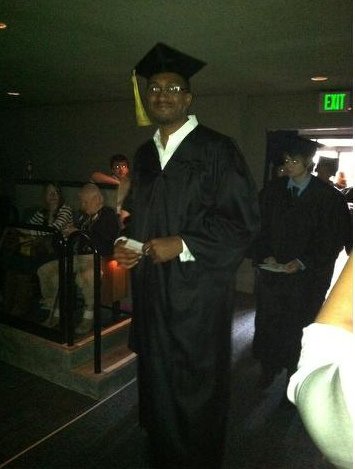 Our beloved brother and Friend Shareef Abdur-Rahim today May 14, 2012
received his Degree from the University of California-Berkeley.
Congratulation from all of us here at Oppressed Peoples Online Word

assistant general manager for the Sacramento Kings. He last played for the Kings of the National Basketball Association (NBA). On the basketball court, he played both forward or center positions. Abdur-Rahim was a standout player during his high school days. He left University of California, Berkeley after one year to enter the 1996 NBA Draft.

In his early NBA career, Abdur-Rahim was the star of the Vancouver Grizzlies franchise for five seasons. He was traded by the Grizzlies in 2001 and then played for the Atlanta Hawks and Portland Trail Blazers before joining his last team, the Sacramento Kings. Nicknamed "Reef",[1] Abdur-Rahim was named an NBA All-Star in the 2001–02 season. He also played on the United States men's national basketball team that won the gold medal at the 2000 Sydney Olympics. Prior to joining the Kings, despite the fact that he achieved solid statistics throughout his career, Abdur-Rahim held the NBA record for most number of games played without making a playoff appearance. Following persistent injuries to his right knee, Abdur-Rahim announced his retirement from basketball on September 22, 2008.

Shareef Abdur-Rahim is the second eldest sibling in a family of twelve children born to Aminah and William Abdur-Rahim.[1] Abdur-Rahim, whose first name means "noble" and whose last name means "servant of the most merciful one,"[2] is a devout Muslim. He values his parents for their guiding influence on him since his youth and credits them with his life philosophy: "remember how you came on all your accomplishments and stay humble."[1] From an early age, Abdur-Rahim was surrounded by family members who played basketball; his brother, Muhammad, played at the University of Detroit while his younger brother, Amir, played at Southeastern Louisiana University.[3] Abdur-Rahim himself started playing competitive basketball at Joseph Wheeler High School in Marietta, Georgia. At Wheeler, he was named "Mr. Basketball" in back-to-back seasons, and he led the school to a state title as a junior in 1994.

Abdur-Rahim later attended college at the University of California, Berkeley, where he maintained a GPA of 3.5.[1] At California, he averaged 21.1 points per game (ppg) and 8.4 rebounds per game (rpg) in 28 games.[1] He was the first freshman in Pac-10 history to win Conference Player of the Year honors, and was named Third Team All-America by the Associated Press.[1] Abdur-Rahim also set single-season freshman records for points, scoring average, field goals, and free throws.[1] After a year at California however, he decided to leave college to enter the 1996 NBA Draft.[1]

Abdur-Rahim was selected third overall by the Vancouver Grizzlies in the 1996 Draft,[4] behind Allen Iverson and Marcus Camby. He made an immediate impact playing for the Grizzlies, becoming the team's leading scorer while setting a franchise record of 18.7 ppg. He also averaged 6.9 rebounds and 2.2 assists in 35 minutes per game. He finished third in balloting for the Schick NBA Rookie of the Year behind Philadelphia's Allen Iverson and Minnesota's Stephon Marbury, and he was picked for the All-Rookie First Team.[1] By the end of the 1996–97 season, Abdur-Rahim led the team in scoring on 33 occasions, rebounding on 23 occasions.[1]

For the next few seasons, Abdur-Rahim remained the centerpiece of the Grizzlies team. In his sophomore season, he averaged 22.3 ppg, 7.1 rpg and 2.6 assists per game (apg).[5] The following season, he elevated his performance with 23.0 ppg, 7.5 rpg, and 3.4 apg.[5] Despite his best efforts, the Grizzlies remained grounded at the bottom two spots of the Midwest Division in his first four seasons.[6][7][8][9] For the 2000–01 season, Abdur-Rahim finished with a 20 ppg-plus average for the fourth straight season[5] and was ranked in the top 20 in 13 NBA statistical categories, once again leading the Grizzlies in both ppg and rpg.[1] Abdur-Rahim's importance to the team was highlighted in a game against the Indiana Pacers on December 1, 2000, when he earned all of the 20 points scored by the Grizzlies in the final quarter of the game.[1]

On June 27, 2001, the Atlanta Hawks reached an agreement to acquire Abdur-Rahim and the 27th overall pick in the 2001 NBA Draft from the Vancouver Grizzlies in exchange for Brevin Knight, Lorenzen Wright and Pau Gasol, the third overall pick in the 2001 NBA Draft.[10] Abdur-Rahim's return to his hometown, and expected partnership with sophomore Jason Terry, provided a significant amount of buzz around the league.[11] While the Hawks finished the 2001–02 campaign with a 33–49 win-loss record, Abdur-Rahim's performances, including a career-high 50-point game,[5] ensured that he would be selected to the NBA All-Star game for that season.[11]

In his second season with the Hawks, Abdur-Rahim achieved another personal milestone on December 28, 2002, when his jump shot against the Washington Wizards made him the fifth-youngest player in NBA history to reach 10,000-points.[1] Although Glenn Robinson, Jason Terry and Abdur-Rahim combined to average 57.9 ppg and become the highest-scoring trio in the league for the 2002–03 season,[11] the Hawks failed to make the playoffs again. With an average of 19.9 ppg and 8.4 rpg, Abdur-Rahim played in all but one of the Hawks' games.[5] By the end of the season, Hawks General Manager Billy Knight decided major changes had to be made for the franchise to move forward, and Abdur-Rahim was traded the next season.[11]

Along with Theo Ratliff and Dan Dickau in exchange for Rasheed Wallace and Wesley Person, Abdur-Rahim was sent to the Portland Trail Blazers on February 9, 2004.[12] His impact in the two seasons with the Trail Blazers was considerably less than in previous seasons. His average was 16.3ppg/7.5rpg and 16.8/7.3rpg for the 2003–04 and 2004–05 campaigns respectively.[5] At the end of the 2004–05 season, Abdur-Rahim became a free agent.[12]

During the 2005 off-season, he was traded via a sign and trade agreement (in principle) to the New Jersey Nets for a first-round draft pick (which Portland planned to trade to the Phoenix Suns for Leandro Barbosa). On August 4, 2005, though the news conference was planned to announce the postponement of his arrival, it was revealed that he failed a required physical due to scar tissue found in his knee. The trade was put on hold, pending a second opinion from other medical sources. On August 7, Abdur-Rahim was quoted saying: "I don't feel I want to be a Net".[13] He felt the knee was a non-issue, claiming that he never missed a game in his entire career because of the knee injury. Two days later, it was announced that New Jersey decided to rescind the trade.[12]

On August 12, 2005, Abdur-Rahim signed a free-agent contract with the Sacramento Kings.[12] In his first season with them, Abdur-Rahim started in 30 of the 72 games he played. As a starter, he averaged 16.0 ppg, 6.2 rpg and 3.0 apg. He shot .543 for field goal percentage, .417 from the three-point range, and almost .800 from the free throw line.[1] The Kings went on to qualify for the 2006 playoffs. Abdur-Rahim made his postseason career debut against the San Antonio Spurs.[1] At the same time, he ended a streak of having played the most number of games in NBA history without participating in the post-season.[14] In his second season with the Kings, Abdur-Rahim continued to be deployed as a sixth man; however, the Kings failed to secure a playoff berth as Abdur-Rahim recorded 9.9 ppg.[5] The 2007–08 season proved to be Abdur-Rahim's last, as he played only six games and his persistent knee injury forced him to announce his retirement on September 22, 2008.[15] He joined the Sacramento Kings' coaching staff as an assistant the following week.[16] On October 7, 2010 Abdur-Rahim was hired to be the assistant general manager for the Sacramento Kings.

Prior to joining the NBA, Abdur-Rahim was the USA's leading scorer and rebounder at the 1994 COPABA Junior World Championship Qualifying Tournament held in Santa Rosa, Argentina.[2] He averaged a double-double of 16.8 points and 10.1 rebounds. While trying for a team high in blocked shots averaging 1.6 blocks per game, he helped push the American squad to an 8–0 record, the gold medal, and a qualifying berth in the 1995 FIBA Junior World Championship.[2] The following May he was named to USA Basketball's 1995 Junior Select Team that captured an 86–77 victory over an International Select Team in the inaugural Hoop Summit Game.[2]

While playing for the Grizzlies, together with several NBA stars such as Kevin Garnett and Tim Hardaway, Abdur-Rahim was selected to be part of the USA Men's basketball team which won the gold medal at the 2000 Olympic Games in Sydney, Australia.[17]

Abdur-Rahim and his wife Delicia have two children: a son, Jabril, and a daughter, Samiyah.[1] Abdur-Rahim has started his own foundation, the Future Foundation, which provides after school and other support services for youth at-risk in Atlanta.[2] On television, Abdur-Rahim has appeared on an episode of The Jamie Foxx Show with fellow NBA players Gary Payton and Vin Baker.[1]