In a stunning vote, a group of U.S. Senate Democrats has broken ranks to join Republicans in rejecting President

Obama’s pick to head the Justice Department’s Civil Rights Division, Debo Adegbile. The confirmation fight focused almost solely on Adegbile’s role in the legal defense of imprisoned Black Panther Mumia Abu-Jamal, who was convicted of killing a Philadelphia police officer, despite Abu-Jamal’s longstanding position of being not guilty. Adegbile was part of a team of lawyers at the NAACP Legal Defense Fund who successfully argued the trial judge’s jury instructions violated Abu-Jamal’s rights. Adegbile’s supporters say the attacks on him mark a new form of Willie Horton politics and race baiting. We discuss the controversy with two guests: Johanna Fernández, professor of history at Baruch College-CUNY and a coordinator with the Campaign to Bring Mumia Home, and Ryan Haygood, director of the NAACP Legal Defense and Educational Fund’s Political Participation Group. 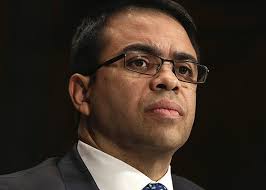 JUAN GONZÁLEZ: A group of Senate Democrats broke ranks with President Obama Wednesday as they joined Republicans to block his pick to lead the Civil Rights Division of the Justice Department. In a 52-to-47 vote, the Senate rejected the nomination of Debo Adegbile, the former acting head of the NAACP Legal Defense Fund. Adegbile is a widely respected lawyer who had led the group’s defense of voting rights.

AMY GOODMAN: But the confirmation fight focused almost solely on Adegbile’s role in the legal defense of imprisoned Black Panther Mumia Abu-Jamal, who was convicted of killing Philadelphia police officer Daniel Faulkner in 1981. The NAACP Legal Defense Fund argued the trial judge’s instructions to the jury violated Abu-Jamal’s rights. Federal courts agreed and in 2011 ordered a new sentencing hearing for Abu-Jamal, a move that eventually took him off death row. Senator Ted Cruz was one of several Republicans who spoke out against Adegbile.

SEN. TED CRUZ: The Fraternal Order of Police vehemently opposes this nomination. According to a letter written by the president of the FOP, Adegbile’s nomination only exacerbates the, quote, "growing division and distrust" towards local law enforcement agencies, a trend that has continued from the time now Labor Secretary Thomas Perez was leading the Department of Justice’s Civil Rights Division. Peter Kirsanow, a member on the U.S. Commission on Civil Rights, wrote, quote, "Responsible people should agree that going out of your way to defend a convicted cop-killer long after it has become unequivocally clear that he was guilty and had suffered no violation of his civil rights disqualifies one from serving as the head of a division of the U.S. Department of Justice."

SEN. DICK DURBIN: The Bush administration’s solicitor general, Paul Clement, stated—and I quote—"I have litigated both with and against Debo and have heard him argue in the Supreme Court. I have always found him to be a formidable advocate of the highest intellect, skills and integrity." Mr. Adegbile’s representation of Mumia Abu-Jamal does not mean that he lacks respect for the rule of law, and it certainly should not disqualify him for this important civil rights job. In fact, his willingness to represent an unpopular defendant in an emotionally charged case demonstrates his appreciation for the rule of law, as well as his respect for the criminal justice system. His critics have attempted to characterize him as someone who actively sought out this case, someone who disparaged the officer who was cut down in the line of duty, Officer Faulkner, and someone who was responsible for Abu-Jamal’s death sentence being overturned. Each of these characterizations is wrong, inaccurate and unfair.