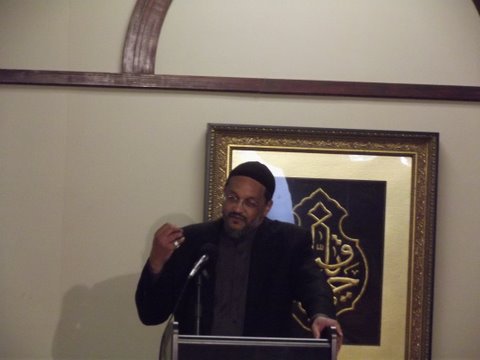 Muslims shouldn?t just live in their neighborhoods, but actively participate. Whatever the cause, whether it be a town council, a neighborhood watch, or just a friendly get together, Muslims should build bridges of understanding by getting involved with fellow members of their community. Sometimes it?s difficult to break the ice with people who don?t seem to have a lot in common with you, but this is one of our jobs as Muslims. The Prophet Muhammad (peace be upon him) made no distinction between Muslims and non-Muslims when he was instructed to uphold the rights of neighbors

The Faith Institute, an outreach wing of the Atlanta Masjid, had a wonderful program on Sunday March 4, 2012, entitled "Roots: Reconnecting Our Heritage" and the invited speaker was Imam Khalid Griggs from The Community Mosque of Winston-Salem NC.  The Faith Institute has arranged several dynamic programs on important and relevant topics related to Islamic, African and African-American history in the past weeks and months.
This program, however, was a marvelous breakthrough on many levels.  Imam Khalid Griggs has carried out research and community activism on such sensitive subjects for many years and there are few American Muslims with his experience.  Having embraced Islam back in the early 1970's, he brought his passion for justice and Black liberation into the emerging Islamic movement and, through the ideological pursuits of the Islamic Party of North America (IPNA), his work found traction and much progress was made for the common good of Muslims and African-Americans.
In the program, Imam Griggs brought out the important points that made the day very exciting in that, in today's climate, subjects like African history, the Slavery Era of America and the emergence of new knowledge relating to the Muslim presence among the enslaved Africans are now to be considered part of the wider society's concerns.  No longer can these subjects be conveniently shoe-boxed into a small corner of narrow historical realities only to be brought out during Black History Month.  Instead, these topics are now in the mainstream of the American narrative and research on these topics has only just begun.

After the program, with the brotherly assistance of Islamic Circle (ICNA) members, there was a fine gourmet dinner served which was enjoyed by all.  May Allah Bless the Faith Institute, the Atlanta Masjid leadership and members and the Islamic Circle of North America.  The wider Muslim community of Atlanta should increase their awareness and support of these institutions and bring their families to the Atlanta Masjid of al-Islam at 560 Fayetteville Rd SE, Atlanta GA 30316.

Book Of The Week

The Fire Next Time...James Baldwin

The Fire Next Time James Baldwin's book The fire Next Time opens up an entirely new world to most readers. It opens

the reader to the harsh world of a black boy growing into a man in the poor city slums and all of the issues that a black man has to face. This book does more for the reader than any article published about the black's living in the poor cities in terms…