The Civil Rights Movement has lost another tireless soldier.  We mourn the passing of Mr. Ozell

Sutton.  As a dedicated family man, a productive citizen of this nation, an esteemed president of Alpha Phi Alpha, as a respected representative of the governor of Arkansas and the Department of Justice, he made a lasting contribution to the cause of civil rights and social justice.  He was a strong supporter of Dr. Martin Luther King Jr. up to the very last moments of his life. 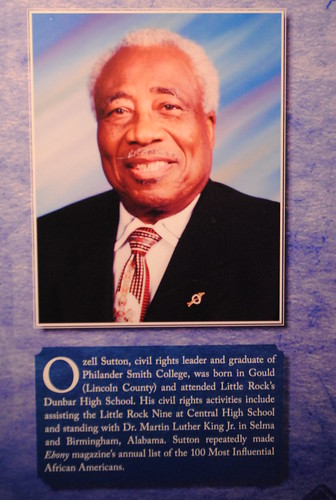 I was proud that he received a Congressional Gold Medal in 2012 for his patriotic service as a member of the Monford Point U.S. Marines serving in World War II at Camp Lejeune, and because he was one of the first African Americans to join the Marine Corps.  The nation and the Atlanta community has only been enriched by his presence.  We mourn with his family because he is gone.  But Mr. Sutton left behind a  powerful legacy of dedication to the highest principles of justice, compassion, and faith.  His memory will serve as an example to all who knew him.  He will be deeply missed.