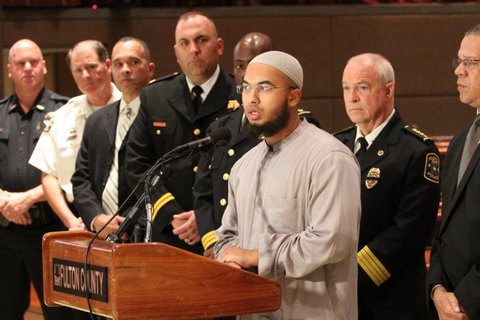 Imam Abdullah Jaber representing Al Farooq Mosque, spoke about how faith based communities can help bridge the gap between the community and law enforcement.

WHAT:           Fulton County Chairman John Eaves, Police Chief Gary Stiles and faith leaders will address the killings of five police officers in Dallas, Texas and the recent shootings in Minnesota and Louisiana.

Chief Stiles, who has served 30 years with the Fulton County Police Department, is the Chairman of the Board of Trustees for the Badge of Honor Memorial Foundation. The goal of the organization is to help families of officers cope with their loss and to provide a lasting symbol of recognition for officers’ life of service. Chief Stiles will work closely with the Dallas Police Department to provide support to all affected by this tragedy.

“Fulton County has been a model for the country,” said Fulton County Chairman John Eaves, "We are sensitive to the community and have always reached out to foster good relationships. This is a troubling time but we are confident that our citizens know our police force is here to protect and serve.”

Fulton County formed an Interfaith Roundtable following the terror attack in Orlando and has established a dialog with religious and cultural leaders to promote peace and acceptance.  This unprecedented relationship has forged new ties that will ensure the community works together on all levels.