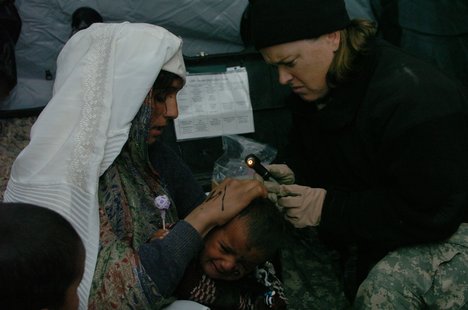 With recent reports that the capital of Afghanistan has been hit hard by a disfiguring disease, it reminded me of a common strain that runs through the history of humankind and of the world. It consists of two parasitic creatures, one being natural and biological and the other one synthetic and ideological. The two infectious strains are pre-emptive wars and post-emptive diseases.

From the earliest times, diseases and plagues have followed warring peoples and nations. The recent pre-emptive wars and brutal occupations by U.S. forces and the post-emptive diseases that have followed are no exception. Patently speaking from a militarily inventive view, the parasitic disease (cutaneous leishmaniasis) creates sores and infections covering the body. It is transmitted though the bites of certain sand-fly species and is threatening 13 million Afghans, many whom are women and children.

The World Health Organization said recently that the number of new reported cases have dramatically increased from an estimated 17,000 people to 65,000 in 2009. In a war-torn and ravaged country like Afghanistan, the high cost of treatment prevents most people from visiting a doctor or seeking medicines. When the parasitic disease does heal, it leaves scars on the face and hands which can easily be seen and which often causes social stigma.

According to Fatima Gilani, director of the Afghan Red Crescent Society, the infectious disease thrives in post-war countries that suffer from poor sanitation and community services. The insects breed on waste and garbage and few people have a resistance to the parasitic disease. While U.S.-led NATO troops have fortified their military bases and encampments with insect repellents and nets, most Afghans remain extremely vulnerable.

But again, parasitic diseases follow parasitic wars. Early pictographs show how wars and unrest caused diseases and plagues. Ancient writings from the Greeks, Romans and the Byzantines reveal how infectious civil wars and conquering armies also spread diseases, like the Athenian and Justinian's Plague and the Roman Pestilences. Infectious plagues-the Black Death, Crusader Plagues and Black Vomit which killed millions-continued to stalk humankind when Christian Crusaders declared war against the Muslim Turks. Where there is war there will be diseases and mass die-offs, a kind of synthetic food chain.

During Europe's conquest of the Americas, small pox and measles devastated and even caused mass extinction among some Indigenous tribes and extremely advanced societies. In the Crimean, Anglo-Boer, Spanish-American Wars and Filipino Insurrections, infectious combat and concentration camps were followed by outbreaks of cholera, typhus, scurvy, and dysentery that killed tens of thousands of civilians and soldiers. World War I helped initiate a virulent pandemic killing 21 million people worldwide.

While conflict in World War II helped cause the Javanese Plague and numerous influenza epidemics, the U.S. invasion and occupation of Vietnam led to the Vietnam Plagues and the U.S. Influenza Epidemic. Many are familiar with the hundreds of thousands that were killed in the Rwandan Genocide, but few can recall the Rwandan Cholera Epidemic where tens of thousands of more people died in refugee camps.

The Third Afghan War which resulted in the utter elimination of British interference until, that is, the recent U.S.-led pre-emptive war against Afghanistan, resulted in the Afghan Influenza Epidemic of 1918. In and around Kabul nearly 100 people died each day. When the Afghan monarchy was overthrown in 1973 by a military coup, an Afghan Small Pox Plague ravaged the country. Many of its victims were the poor and was finally eradicated by the World Health Organization.

Invaders and occupiers are not immune to plagues and diseases. The U.S. recently has suffered many outbreaks of diseases, like Gulf War Syndrome, U.S. Anthrax-Influenza-West Nile Virus Outbreaks, and TB Pandemics. Thousands of American soldiers have returned with the Baghdad Plague and at least nine documented infectious diseases from Afghanistan, like brucellosis, jejuni, and Q fever. Some medical officials claim treatment will cost the American taxpayer at least $15 billion.

Humankind is trapped in a sometimes productive, and sometimes parasitic, global food chain. Just as certain infections and diseases need a host to survive, so do pre-emptive wars and their post-emptive occupations. But not only are pre-emptive wars and their occupations parasitic in nature-devouring their host-in this case Afghanistan and Iraq, not to mention American taxpayers-but they also prey on the most vulnerable and susceptible members of society: women and children.

As of late, there have been hundreds of books written about the coming plagues and pan-epidemics and how they will be super and superior, maybe even immune to human-made antibiotics. However, there is one infectious and killer disease that is already here. It is called pre-emptive wars and it can be easily prevented. In other words, humankind can actually cure it, that is, if they treat and heal militant-like ideological infections and dispose demagogic leaders.

It is devastating enough when Nature strikes back, let alone when parasitic humans do the same with their pre-emptive wars and perpetual military occupations. Perhaps someday the U.S. will not only continue to maintain and fund the Center for Disease Control, but establish a Center for Military Control (CMC). The CMC could start in Afghanistan and Iraq, by treating the millions that have been infected with diseases and cancers caused by the infectious ideology of U.S. militarism and its pre-emptive wars.

In doing this, at least one common strain that runs throughout history, or infectious and parasitic wars and militarism, would be interrupted and could maybe even be eliminated.