Anti-Muslim blogger Pamela Geller, one of the driving forces behind the Ground Zero mosque controversy, has set her 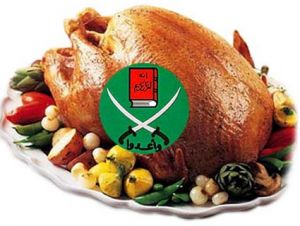 Muslim Brotherhood Turkeys Are Taking Advantage Of The Arab Spring.

sights on a new manifestation of the stealth jihad: Your Thanksgiving turkey. Geller is calling for a boycott of Butterball, accusing the compainy of selling "stealh halal" turkeys prepared in accordance with Muslim dietary laws:

Across this great country, on Thanksgiving tables nationwide, infidel Americans are unwittingly going to be serving halal turkeys to their families this Thursday. Turkeys that are halal certified -- who wants that, especially on a day on which we are giving thanks to G-d for our freedom? I wouldn't knowingly buy a halal turkey -- would you? Halal turkey, slaughtered according to the rules of Islamic law, is just the opposite of what Thanksgiving represents: freedom and inclusiveness, neither of which are allowed for under that same Islamic law.

Just in case you're wondering, Jewish and Muslim dietary laws regarding meat are very similar. Similar enough, in fact, that a proposed ban on the ritual killing of animals in the Netherlands has both the Jewish and Muslim religious communities up in arms.

Now, assuming Geller's right about Butterball turkeys being halal, you might think that in a capitalist economy, halal turkeys are a sign of meat sellers responding to market demand for food prepared a certain way. You might even be tempted to observe that Muslim Americans marking a secular, American holiday celebrating pluralism and freedom from religious persecution might be a sign of the extent to which American Muslims have assimilated into American culture. What you didn't know was that when markets respond to the demands of Muslim consumers, freedom dies.

With expertise in catering to the cultural and linguistic needs of countries all around the world, we are USDA Approved, Russian Approved, and Halal Certified. Butterball has a wide-array of product choices to serve almost any price point and market, and will work with you to meet specific product needs. With both the Butterball and Carolina Turkey brands, you will find all of the high-quality products and experience you need to make every meal a celebration.