On September 10th, 2016, one day before the 15th anniversary of September, 11th, American Muslims Health 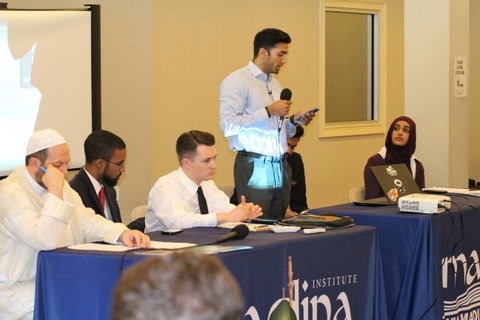 Professionals- Atlanta Chapter hosted an open panel discussion in collaboration with many esteemed speakers, and organizations. The theme of the afternoon was Terrorism, Islamophobia, and mental health.

“With all of the miss information about Islam publicly, many have the assumption that terrorists and Muslims are synonymous. Our objective today is to share how we perceive Islamophobia and its effects on the mental health of American Muslims,” said Maher Ahmed, Atlanta native, and President of AMHP- Atlanta.

American muslims have been in the spotlight chronically since 9/11. The perception about this community has gone from stereotyping and demeaning to scary. "This perpetual maintenance of fear affects the mental health of not only Muslims, but holistically as a society. The misrepresentation of our religion has caused a national dialogue of fear that has been narrating the lives of muslims,” explained Ahmed. "Such dialogue has lead to a large increase in the rate of hate crimes towards immigrants, or anyone who looks Muslim; Muslim women who wear hijab are also targeted at a higher rate then muslim men.”

Psychologists have been researching the potential harm of this type of backlash. When terrorism occurs it effects everyone. However, when it is highlighted in the media, how does this effect American Muslims differently?

One of the panelist addressing this issue was, Zahra Murtaza a PhD candidate at GSU stated “Terrorism effects everybody, and we know that it is a phenomenon that effects the human experience. Any type of violence is not natural, but as Muslims we have an additional level of fear," she continued. “There is a lack of allowing Muslims to grieve. There were muslims present during the 9-11 attacks, but their voices were silenced and misrepresented, or not acknowledged even.”

The potential ramifications could cause a type of Post Traumatic Stress Disorder we haven’t seen before, and the like of which has only been researched in war veterans, and trauma victims.

Sheik Dr. Muhammad Bin Yahya Al-Ninowy, Physician and founder of Madina Institute USA put things into context. “From a psychiatric perspective for American Muslims if September, 11th was the first trauma that eventually hit, obviously with them being accused of being inherently evil, or their faith is inherently violent, or that their values are incompatible with the wider world, profiling, etc. - It has become the norm to couple every act of violence that is in the name of Islam with terrorism.” Sheik Dr. Ninowy is concerned this persistent re-experiencing of past traumatic events to cause a new type of PTSD. “This is what American Muslims experience every single day, and he is surveying the community for a research study on islamophobia’s effects on mental health and wellness."

Throughout the afternoon many shared their stories, and experiences of living in a post-9-11. CAIR-GA Executive Director Edward Ahmed Mitchell, shared a personal encounter with someone with PTSD, and his concern for young people turning away from religion. “Being the best observant, practicing, and proud Muslims we can be is the best defense we can have.” Mitchell concluded in saying that countering Islamophobia, and hate by engaging our community with outreach is our best foot forward.

Our coping mechanisms shouldn’t push us away from being devout muslims. Being Muslims makes you more American not less of one.

A take away was that these types of discussions are beneficial for the wellbeing of American Muslims. It allows for those private conversations in our head to be properly addressed.

The entire discussion is viewable on the Madina Institute USA and AMHP YouTube channels.

"Maher Ahmed, 30, is a medical student who serves as the President of the Atlanta Chapter of American Muslim Health Professionals (AMHP-Atlanta). "