Oliver Stone's Son, Defender of Ahmadinejad, And Converts to Islam

Ahmadinejad, converted to Islam on Tuesday while filming a documentary in Iran, he told Agence France Presse.

"The conversion to Islam is not abandoning Christianity or Judaism, which I was born with. It means I have accepted Mohammad and other prophets," Stone, whose famous father is Jewish and mother is Christian, told AFP. He underwent the ceremony in the city of Isfahan.

The 27-year-old did not say why he converted. Iran's Fars news agency said he had become a Shiite and taken the Muslim first name Ali.

In an interview with TheWrap at the Toronto Film Festival in September, he supported Iran’s right to a nuclear program as a defense against threats from Israel. He said criticizing the Iranian government is “like someone coming to your house and saying the father shouldn’t hit the kids,” he said. “Who are we to tell them how to rule their country?” 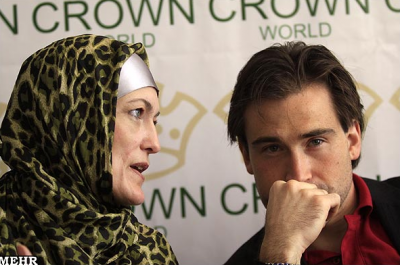 “Iran is ruled by law,” said Stone (pictured with coproducer Melissa Carter in Tehran). “People don’t like Ahmadinejad, but that doesn’t warrant a war or an uprising.”

Stone, who studied history at Princeton, has launched a co-production company to make movies based on Iranian history and culture. He said in September that he wants to make films in Iran, “because they’re the biggest filmmakers in the Middle East, I’m very international-minded."

Besides directing, Stone has acted in several films, including his father's. His small roles in Oliver Stone films included a fraternity pledge in "W" and the young Jim Morrison in "The Doors."

Sean Stone and Anchor Woman PressTV Sister Marzieh Hashemi
US filmmaker Sean Stone, son of Oscar-winning director Oliver Stone, converted to Islam on Tuesday in Isfahan, Iran. Stone, whose new Muslim name is Ali, is making a documentary in Iran. In an interview with Fars News he said: "I think just like how Babylon regime collapsed, today's world powers will go down." Answering a question about why he has converted to Islam he replied: "The religion of Islam is the continuation of God's word, a God who has sent Prophet Khalil and Moses (Peace be upon them) , has unified all religions and principles of beliefs. Prophet Muhammad (Peace be upon him) unified all people when world was full of disbelief and I understand this bravery and cognition and for this reason I became Muslim."