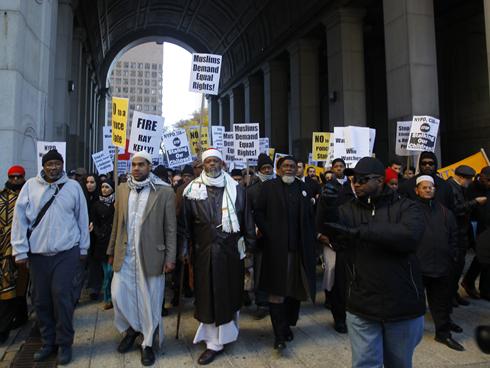 In a letter to the mayor posted online, the leaders wrote that “very disturbing revelations have come to light regarding the city's treatment of Muslim New Yorkers” that make it impossible for them to break bread with him at the year-end function.

“We believe with heartfelt conviction that during times when a community's rights are being flagrantly violated its leaders cannot in good conscience appear at a public gathering with the government official who is ultimately responsible and smile for the cameras as if all is well, when we know full well that it is not,” the letter reads.

The note refers to a series of investigative reports published by the Associated Press earlier this year that detailed how over the decade since the Sept. 11 attacks, the NYPD has been monitoring and profiling Muslims across the city ....

The articles described how a demographics department in the NYPD infiltrated mosques and student groups and built databases of Arab cabdrivers. A “Moroccan initiative” of the demographics unit zeroed in on the everyday activities of Moroccans solely on the basis of their ethnicity, one article said.

“Mayor Bloomberg, the extent of these civil rights violations is astonishing, yet instead of calling for accountability and the rule of law, you have thus far defended the NYPD's misconduct,” the letter said.

The mayor has backed the NYPD's tactics, arguing the city has to be proactive to prevent terrorism and that its actions do not unfairly target Muslims.

“If you want to look for cases of measles, you'll find a lot more of them among young people,” he said, according to an Associated Press account. “That's not targeting young people to go see whether they have measles or not.”

A spokesman for the mayor said a couple of dozen Muslim community leaders had RSVP'd that they would attend the event. "The mayor's office and the NYPD maintain their strong ties with the city's Muslim communities–in fact, the police commissioner spoke at the Masjid Salaam Mosque in the Bronx this afternoon," the spokesman said.

Prior to the Associated Press articles, Mayor Michael Bloomberg had won praise from Muslims for his outspoken defense of a proposed community center near Ground Zero. But the NYPD's surveillance program has roiled local Muslims, and the breakfast boycott is the latest protest to result.

The letter was signed by a dozen leaders of mosques and Muslim organizations, and the website lists more than 30 other imams, activists and academics in support of the boycott.