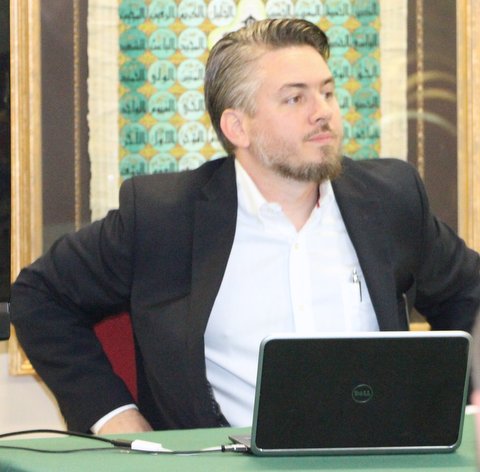 Northeast Florida, Jacksonville’s oldest and largest mosque and one that had been without a spiritual leader since 2005.

Six years with an empty pulpit meant there was a lot for the 34-year-old, first-time imam to do, including providing direction in religious education, future expansion, not to mention conducting weddings and funerals.

But those first six months turned out to be easy compared to last week, when Navy SEALs killed Osama bin Laden and FBI agents killed the man suspected of bombing the Jacksonville mosque in 2010.

“It’s been almost seven straight days of not really sleeping,” Bradford said Friday. “It’s been exhausting and it’s been fulfilling at the same time.”

Exhausting because he’s been giving interview after interview to television and newspaper reporters seeking the mosque’s take on those major events. It has been fulfilling because he’s also been providing fact sheets and sermons to help the center’s members speak confidently about the deaths of bin Laden and Sandlin Smith.

“It’s touched on the scholar aspect of my job and the public face aspect because I was going out to meet the media,” he said.

Leaders of the mosque say Bradford was hired for the job because he possesses a pedigree and set of skills that make him well suited to lead a mosque in the Bible Belt.

Bradford is a Jacksonville native and has an obviously non-Middle Eastern name and appearance. These attributes will help in his passion for interfaith dialogue and his desire to dispel misconceptions about sharia law, which he says are shared by Muslims and non-Muslims alike. He’s also Saudi-educated, speaks flawless Arabic and has a solid knowledge of Islamic history and theology, equipping him to provide spiritual guidance to mosque members of all ages and ethnicities.

“He’s a gift from God almighty,” said Ashraf Shaikh, a co-founder of the mosque and a leader of its six-year search for an imam.

He proved his worth last week alone, Shaikh said.

“We would have been scrambling to communicate with the community without him,” Shaikh said. “You hate to see anyone get killed ... but these things do happen and we as a community of faith have to be ready to react, and he handled the situation very well.”

Bradford has made some startling first impressions across the First Coast.

“My first impression is that he was young,” said the Rev. Steve Goyer, pastor of Riverside Presbyterian Church.

But having lunch with the new imam and seeing him in action at local interfaith events has proved there’s more than meets the eye, Goyer said.

“He’s old in wisdom ... and has a conciliatory heart and is compassionate.”

Goyer admitted to being taken aback by Bradford’s decidedly non-Muslim appearance and name.

“If he shaved his beard, he’d look like any other College Joe guy,” Goyer said.

Bradford said he knows he has that effect on people who are often baffled by his choice of attire: casual western business wear instead of the flowing robes and skull caps many imams wear.

“People are really taken aback by that,” Bradford said in a recent interview in his office.

Bradford is also western on the inside. While he has bachelor’s and master’s degrees in sharia law from the University of Medina in Saudi Arabia, he’s pushing for decidedly American ways of being Muslim.

He’s ruffled feathers by pushing to allow women to worship in the main hall along with men, a practice not endorsed in many of the Muslim nations that the center’s members hail from.

“I came out very publicly in the beginning and said this is the way it’s going to be, and if you don’t like it bring me some evidence of your position,” Bradford said. “I have not found one iota of proof” that Islam requires women to worship in separate rooms from men.

Bradford accepted Islam at age 15 after investigating the tenets of the faith. He said it wasn’t a conversion from his original Christian faith.

“I say ‘acceptance of Islam’ because conversion means you’ve left something for the sake of something else,” he said. “And I haven’t left Jesus, left Moses or my belief in God - in fact to be a Muslim you have ... to believe Jesus was the messiah.”

Educating others about Islam is one of Bradford’s top goals, which these days means talking a lot about sharia law.

Sharia is the Muslim equivalent of Catholic canon law or Torah law for Jews, Bradford said, and never means imposing Islam on non-Muslims.

That message may be as surprising to some as being an imam has been to Bradford. After finishing college, he spent a few years working as a legal adviser in the overseas banking industry and saw his future there. But while he was visiting his parents in Jacksonville last summer, they suggested he apply for the job at his hometown mosque.

He went for it as a way to give his parents more contact with his wife and five children, and because he felt his education and background could help the Islamic center.

“To see someone like Joe be able to become a leader in Islam gives me motivation to learn more,” Birdal said. “He’s like an inspiration.”