London's High Court ruled the case, relating to the 1950s Mau Mau uprising, could proceed despite the time elapsed.

Three Kenyans who were tortured by British colonial authorities can proceed with their legal claims against the UK government, a court has ruled.

The ruling means the case will now go to a full trial. Lawyers for the three hailed it as a "historic" judgement.

The government accepts the colonial administration tortured detainees but denies liability and will appeal.

Thousands of people were killed during the Mau Mau revolt against British rule in Kenya in the 1950s and 1960s.

The government had initially argued that all liabilities for the torture by colonial authorities were transferred to the Kenyan Republic upon independence in 1963 and that it could not be held liable now. 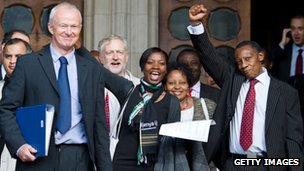 But in 2011, the High Court ruled the claimants - Paulo Muoka Nzili, Wambuga Wa Nyingi and Jane Muthoni Mara - did have "arguable cases in law".

Their lawyers allege that Mr Nzili was castrated, Mr Nyingi was severely beaten and Mrs Mara was subjected to appalling sexual abuse in detention camps during the rebellion. A fourth claimant, Ndiku Mutwiwa Mutua, died earlier this year.

After the 2011 ruling, the case went back to the High Court in July to consider a claim by the UK Foreign and Commonwealth Office (FCO) that the actions had been brought outside the legal time limit. The FCO said it faced "irredeemable difficulties" in relation to the availability of witnesses and documents.

But on Friday, Mr Justice McCombe ruled the victims had established a proper case for the court to exercise its discretion and allowed their claims to proceed to trial. 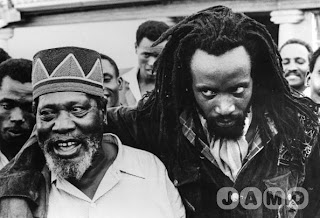 As the news filtered through, several dozen elderly Kenyans erupted into cheers. They linked arms and danced through the grounds of the Kenya Human Rights Commission, which has been supporting the claimants.

For them, and other veterans of the Mau Mau struggle, today's judgement was a significant victory.

But elsewhere in Kenya the case has received little attention. Only a handful of reporters from the Kenyan media turned up to cover the reaction from the veterans themselves.

There are historical reasons for this. Many of those who found themselves in power following independence in 1963 had previously been associated with the Home Guard: those who fought with the British colonial authorities against the Mau Mau rebels.

When independence came, many believed this chapter in Kenya's recent history would sow division rather than foster unity. The elderly veterans of that struggle are still fighting for recognition, both at home and abroad.

In his ruling, the judge said: "A fair trial for the Kenyans on this part of the case does remain possible and the evidence on both sides does remain significantly cogent for the court to complete its task satisfactorily."

A lawyer for the three said the claimants had not been in court because they were in the Kenyan capital Nairobi, but they were "absolutely delighted" when they learned of the result.

Martyn Day said lawyers would be pressing for a trial "as quickly as possible" but they would also be pushing for the government to reach an out-of-court settlement.

"This is a historic judgement which will reverberate around the world and will have repercussions for years to come," he said in a separate statement.

"The British government has admitted that these three Kenyans were brutally tortured by the British colony and yet they have been hiding behind technical legal defences for three years in order to avoid any legal responsibility. This was always morally repugnant and today the judge has also rejected these arguments."

He added: "Following this judgement we can but hope that our government will at last do the honourable thing and sit down and resolve these claims. There will undoubtedly be victims of colonial torture from Malaya to the Yemen, from Cyprus to Palestine, who will be reading this judgement with great care."

Written evidence from the three Kenyans sheds light on their treatment at the hands of colonial forces:

A spokesman for the FCO said the judgement had "potentially significant and far-reaching legal implications".

"The normal time limit for bringing a civil action is three to six years. In this case that period has been extended to over 50 years despite the fact that the key decision-makers are dead and unable to give their account of what happened," the spokesman said.

"Since this is an important legal issue, we have taken the decision to appeal. In light of the legal proceedings it would not be appropriate for the government to comment any further on the detail of the case."

The spokesman reiterated that the government did not dispute that each of the claimants suffered torture at the hands of colonial forces.

"We have always said that we understand the pain and grievance felt by those, on all sides, who were involved in the divisive and bloody events of the emergency period in Kenya, and it is right that those who feel they have a case are free to take it to the courts," he said.