Malcolm X's daughter on Juneteenth: 'We're in denial of the African holocaust' 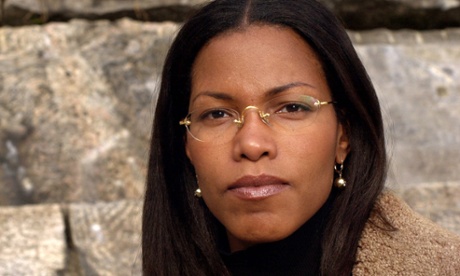 Ilyasah Shabazz, daughter of Malcolm X, is known for her work as a memoirist and activist. Photograph: Stephen Chernin/AP

when Texas learned that the civil war had ended – Ilyasah Shabazz, daughter of human and civil rights activist Malcolm X, implored African Americans not to forget their history.

"We're in denial of the African holocaust," Shabazz said. "Most times, people don't want to talk about it. One is often restless or termed a racist just for having compassion for the African experience, for speaking truth to the trans-Atlantic and Arab slave trades, for speaking truth to the significant omission of our history. We don't want to sit down and listen to these things, or to discuss them. But we have to."

To this, the audience cheered, clapped and nodded their heads in agreement. Around 150 people turned up to hear the daughter of the civil rights icon speak.

Juneteenth is a celebration that takes place annually on the 19 June to commemorate the end of slavery in the United States. Juneteenth is recognized in most US states, and, in 1997, Congress officially recognized the day as Juneteenth Independence Day.

Shabazz spoke passionately and at times poignantly of the African American experience, and said that understanding the role slavery played in shaping the modern world is a way of paying hommage to their ancestors.

"As we share in a discussion of civil rights, we must reflect on their sacrifices and contributions of their lives," Shabazz said, adding, "The struggle is not over. The struggle continues."

One of Malcolm X's six daughters, Shabazz was only two when her father, widely-regarded as one of the most notable and influential African Americans in history, was assassinated on 21 February 1965. She is an author and motivational speaker, and is perhaps best well known for her memoir, Growing Up X.

"Malcolm taught … the truth that our history did not begin in slavery but that our ancestors, refined and industrious African men and women, were the architects of great civilizations," she said.

At the end of her speech, the audience stood for a moment of silence while Shabazz read off a list of names that included the Queen of Sheba, Nelson Mandela, Dr Martin Luther King, and her father, highlighting the long and global history of Africans.

On 19 June, 1865, Union soldiers, led by Major General Gordon Granger, landed at Galveston, Texas, with news that the civil war had ended.

Granger officially delivered General Order No3, which stated: "The people of Texas are informed that in accordance with a proclamation from the executive of the United States, all slaves are free."

Shabazz spokle at the African Burial Ground National Monument in downtown Manhattan that perseveres a colonial-era cemetery. More than 400 men, women and children of African descent – some free, most enslaved – are buried there.

The late 17th century burial site had been forgotten for nearly two centuries until it was rediscovered in the early 1990s during excavation.

The late poet Dr Maya Angelou spoke at a dedication ceremony opening the slave burial site to the public in 2007.

"You may bury me in the bottom of Manhattan," she said. "I will rise. My people will get me. I will rise out of the huts of history’s shame."