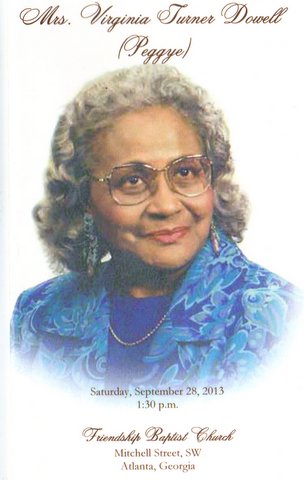 Mrs. Virginia Elizabeth Turner Dowell, known as “Peggye” to her friends, and “Ma Peg” to family, was born in Atlanta on May 18, 1926 to Virginia Brown Turner and to Brister William Turner. She had one brother, John Brister Turner.  At the age of five, Peggye lost her father in World War I, necessitating Peggye’s mother to rear her children by herself for many years.

Peggye attended Booker T. Washington School in Atlanta, and graduated from Spelman College in 1947 making the third generation to do so.  While at college, Peggye majored in Music and sang in the Spelman Glee Club.    Unfortunately, during that time, blacks were not allowed to attend graduate schools in Georgia. Eligible black students were given full-tuition scholarships to attend any school of their choice in the north, to keep them from going to southern graduate schools.  Peggye chose Julliard School of Music, and Columbia University in New York finishing with a M.A. degree from the Teacher’s College of Columbia in 1948.  This afforded her the opportunity to sing at President Eisenhower’s inauguration.

In 1949 she married Tyra Dowell, and began her teaching career.   She completed seven years of teaching and supervising as an Educational Consultant at Junior Academy in Brooklyn, New York.  While there, she published a book called, Getting A Good Start – A Handbook for New Teachers.  In 1960, Peggye worked in the field of Early Childhood Education in the Malverne Public School System.  While there, she developed a new program for gifted children called “Odyssey;” co-authored a book called  Elementary Mathematic Curriculum for Malverne Public Schools (1980); and initiated and directed “Math Olympiads” in New York.  In 1983, Peggye retired with thirty-five golden years of teaching experience.

In addition to her religious dedication, Peggye embodied her devotion to excellence in education, and her never-ending service to Spelman College.  She sustained a passion to inspire young women to attend Spelman.  In pursuit of her dreams, she organized the New York Chapter of the National Alumnae Association of Spelman College (NAASC) in 1978, and served as president until 1982.  She also served as President and Treasurer of the Atlanta Chapter of NAASC; Coordinator of the Northeast Regional Chapter 1975 – 1978; edited “Feedback,” the first NAASC Regional Newsletter, and “The New York Scene,” the first New York Chapter Newsletter; served on the NAASC Executive Committee; spearheaded the Spelman-Morehouse Christmas Carol Concert by bringing in over $40,000 in contributions. For that, she received the N.Y. Morehouse College Alumnae Award For Outstanding Service. She also chaired the first successful NAASC National Fund-Raiser – Car and Fur Raffle, served on the Board of Trustees, and on the Advisory Board of Spelman College.  As a result of her service to Spelman, the New York Chapter of NAASC donated The Virginia T. Dowell Endowed Scholarship Fund in her honor (an annual award to aid deserving New York freshmen attending Spelman College).  Peggye also received the Award of Excellence for the Northeastern Region of NAASC, the

Spelman College Centennial Citation and the Outstanding Service As President Award from the New York Chapter of NAASC. Later, the Atlanta Journal-Constitution featured Peggye in an article entitled, “Volunteering Women.”

Peggye was as fervent in her contributions with her New York community as she was with Spelman College and Friendship Baptist.  She became one of the founders of the first 4-H club in which young black girls could participate.  Nine “Blue-Ribbon” (no longer segregated) 4-H Clubs of this type were established and supported by Cornell University. Her services also reached those who were indigent, by volunteering for eighteen years for the Salvation Army in New York.  She also promoted and developed the After-School Weekend Volunteer Tutors for Disabled Children.

Despite many hours spent with Spelman College, Friendship, and the community, Peggye’s professional life never over-shadowed her time and passion for her family.  She was a loving mother and grandmother, an exemplary teacher, great role-model, a supportive wife and a giving, compassionate, and humble woman.  Those who knew her recognized her love, pride and priority for her family.  Peggye’s character was portrayed by her seemingly endless energy and willingness to assist and inspire others.  Her professional and organizational skills were unmatched.  And she beautified everything she touched.  Her infectious smile made her a confidant and a “mom” to many.

Virginia T. Dowell is survived by two daughters:  Jehan Abdur-Rashid (formally Jeanne Dowell) and Ginger Dowell-McGowen.  She has six grandchildren: Khalil, Sasha, Khadeejah, Jameela, Fatimah and Ru’yaa; one niece: Marian Turner Hopkins; and one nephew: Charles Turner.  She also has nineteen great-grandchildren, one great-nephew, many cousins and relatives.  It was Peggye’s grandchildren who were able to trace their grandmother’s roots back to the Tuareg tribe in Timbuktu, Mali, Africa.

In The Loving Memory Of Mrs. Virginia Turner Dowell Pictures