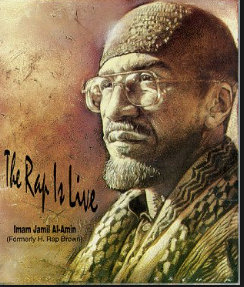 Brother Kairi Al-Amin, Imam Jamil and Sis. Karima Al-Amin’s son, has reported that Imam Jamil’s health is stable. He traveled the more than 1,700 miles to visit Imam Jamil this month. While a trip had been planned, this one also took place after reports flashed across the country that Imam Jamil (formerly known as H. Rap Brown) had suffered a stroke. And, as Kairi says, “as always, The Imam sends his salaams.”
We know Imam Jamil continues to face and fight several health issues, given the Bureau of Prisons’ apparent policy of neglect & at times outright refusal to provide adequate medical treatment against political prisoners: Execution By Medical Neglect.
Speak Out For Justice
Meanwhile supporters are gathering Friday, July 26, 4pm in Atlanta’s CNN Plaza to demonstrate support for Imam Jamil, calling for his release in this 19th year of imprisonment. The demonstration immediately follows the Friday prayers opening the 36th Annual Riyaadah (gathering of Imam Jamil’s community, the National Jammat, or Al Ummah) being held this year in Atlanta. The action is being co-sponsored by the Aafia Foundation, led by Bro. Al Hajj Mauri Saalakhan and the Imam Jamil Action Network (IJAN). IJAN also sponsoring workshops literature tables and updates on work to free Imam Jamil throughout the Riyaadah.
Execution By Medical Neglect
Show Your Support! Keep Sending Greeting Cards to Imam Jamil!
JAMIL AL-AMIN, #99974-555, USP Tucson, U.S. Penitentiary, P.O.Box 24550, Tucson, AZ 85734
Sign The Gag Order Petition: “Its A Government Conspiracy”
Imam Jamil has been hounded for over 40 years for his ability to speak to the wrong; against oppression and injustice inflicted upon humanity, especially the millions of descendants of the African Slave Trade - that built this country. This is why the U.S. has Gagged his most powerful weapon. He has been denied his human and civil rights to speak. During his trial, the judge placed a Gag Order against him speaking. After the wrongful conviction, the U.S. Bureau of Prisons has continued to refuse to allow academics and journalists to interview him.
END The Gag Order. Sign The Petition kundnani.org/imam Jamil
Bro. Kairi Al-Amin launches
whathappened2rap.com
WH2R?
The Awareness Campaign & Documentary for Imam Jamil
Go to:
Share!
Donate to Make It Happen!
whathappend2rap.com
UPCOMING EVENTS
•RADIO FREE IMAM JAMIL, FREE ‘EM ALL POLITICAL PRISONERS MEDIA WEEK,
AUGUST 18-24 - Black August. Watch Facebook, Instagram, Radio, Blogs, Internet, TV 470-451-8416
•RE-LEARNING H. RAP BROWN NAT’L CONFERENCE, Auburn Ave. Research Library, Atlanta,
OCTOBER 4&5
WHAT YOU CAN DO!!
*SHARE/DONATE to whathappened2rap.com! *SIGN /CIRCULATE THE GAG ORDER PETITION!
*SEND CARD TO IMAM JAMIL!
*SIGN/CIRCULATE THE PETITION TO GET IMAM JAMIL BACK TO GEORGIA!
*BE ON LOOKOUT FOR THE INTERNATIONAL CAMPAIGN
470-272-9901
TO WRITE IMAM JAMIL AL-AMIN #99974-555
USP Tucson
U.S. Penitentiary
P.O.Box 24550 Tucson, AZ 85734
TO SEND HIM COMMISSARY FUNDS:
Send a MONEY ORDER to: Federal Bureau of Prisons Jamil Al-Amin #99974-555 P.O.Box 474701
DesMoines, IA 50947-0001

About this website
sfgate.com
Court rules against militant formerly known as H. Rap Brown
ATLANTA - A prosecutor violated the constitutional rights of the 1960s black…