How broadband is changing Africa

Norman Borlaug, whose work in Mexico and India led to the 'green revolution' in agricultural production, died last week 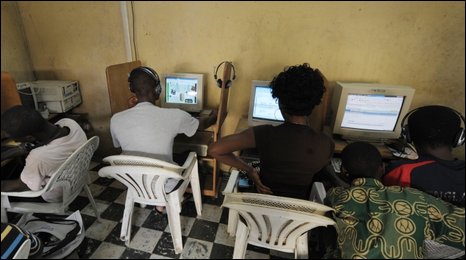 Fast broadband will transform Africa, and the rest of the world will change too, says Bill Thompson.

and was widely commemorated for his important work.

While the introduction of new crops and the use of irrigation, fertilisers and pesticides certainly enabled us to feed millions of people, the crops were delivered at a price, and we should not forget that Borlaug's green revolution, like every revolution, had a negative as well as a positive side.

New farming practices create dependencies on machinery and chemicals, and the the patents that protect genetically modified crops limit the ability of farmers to do things like retain seed from one harvest to plant next year, forcing them instead to buy anew each year.

I was reminded of the debate over the green revolution this week as I stood outside my hotel in Nairobi, Kenya, and watched a work gang lay fibre optic cable in a trench they were laboriously digging with pickaxes on the other side of the busy road.

I was in Africa with the team from Digital Planet, the BBC World Service radio technology programme I appear on regularly. We were there to make a special edition of the show as part of the World Service's Connected Africa season.

BBC technology correspondent Rory Cellan-Jones is on the coast at Mombasa, where the Seacom cable came ashore, and Click's Dan Simmons and World News reporter Adam Blenford are also in Africa to present stories about the impact of new technologies on the continent.

The cable I saw being laid will form part of a high speed network within this major city and will probably be used to link Kenyan internet users to the rest of the world through Seacomand Teams, the two undersea fibre cables that have recently come ashore in East Africa after years of effort and investment.

It will be used by people like Daniel Mulu, the musician and animator who works on a children's show for Kenyan TV while promoting his group, Just A Band, with some of the most innovative videos to be found on YouTube, and Alex Kaluyu, the technology programme officer at the Kenya Union of the Blind who is working on Thunder, an open source tool to support blind and partially sighted computer users.

And over time it will bind the countries of east Africa fully into the global network that is changing the world.

Yet even though I'm optimistic about the creative energy, entrepreneurial ability and business acumen of the people I have been lucky enough to meet during my brief trip to Nairobi, there is another side to the digital revolution that is starting to sweep over Africa, just as there was another side to the green revolution in agriculture.

The technology that is currently being rolled out throughout Africa is technology that was largely developed in the United States, and much of it is sold by companies that are US-based, even if the actual manufacturing takes place elsewhere.

The patents that cover the technologies are held in the West, the engineers who design and develop new models and new offerings are largely Western, and the model of the world that informs these technologies is the market-driven liberalism that is typical of the western economies even after the financial shock of the last 12 months.

And those African entrepreneurs who want to improve on the imported technology or even want to manufacture their own versions locally in order to reduce costs will find that the IT industry is just as keen to use patent law to protect what it believes is its property as the pharmaceutical companies are to limit the local manufacture of life-saving drugs if it undercuts their market.

Despite these potential problems, and although the impact of the new fast undersea cables is yet to be widely felt in either connection speeds (which should go up) or prices (which should go down) there is clearly a great deal of optimism, and many Africans are gearing up to take maximum advantage of the opportunities that the network offers.

However those of us who live in countries that have had fast broadband for years should not assume that the things they will do with the network are the things that currently generate attention or money on the western-dominated internet we have today.

We should not assume that along with access to high speed internet traffic we are also exporting attitudes, business models or even sorts of content, or act as if we are somehow offering Africa entry into the club of connected nations on condition that it agrees to play by the rules we have already established.

We need to allow the network to be changed by the Africans who are starting to use it. We need to offer advice and support where it is asked for, because our experience of the impact of broadband is greater, and we may have useful things to offer, but this must be done in a spirit of co-operation and friendship, and we must never attempt to limit the creativity of those who are new to the network.

The multi-cultural internet is only just beginning to emerge, and just as we have found in multi-cultural Britain the changes go much deeper than just having some new languages in schools and new religious buildings on the streets.

I hope we are ready for the change that the African internet will have on us all.