Hezbollah chief emerges from his hideout to protest anti-Islam film 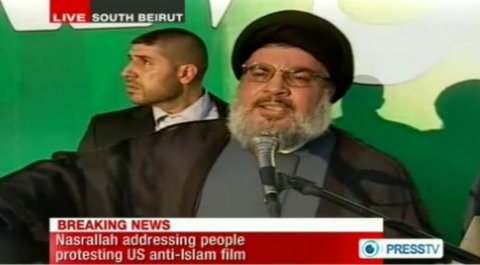 ‘O Prophet, we die for you’

supporters who took to the streets of southern Beirut to denounce a film mocking Islam and the Prophet Mohammed (PBUH).

"O Prophet, we die for you, my soul and my blood are for you," the leader of the powerful Lebanese Shiite movement said, urging the crowd to repeat the words after him for the whole world to hear.

Nasrallah has called for a week of protests across the country over the low-budget, American-made film, describing it as the "worst attack ever on Islam."

"All our people and governments must put pressure on the international community to issue international and national laws to criminalise insults of the three world religions," he said, referring to Christianity, Islam and Judaism.

Supporters of the Shiite leader were delirious when he made his surprise appearance, which lasted about 15 minutes.

"This is not a short-lived movement, or a mobilisation to let off steam, but the start of a mobilisation that needs to be followed across the Muslim Ummah (nation)," said Nasrallah.

It was his fifth public appearance in six years, and the first time he made a full speech in person to thousands of his supporters since 2008. Nasrallah has been in hiding since 2006, when Hezbollah and Israel fought a bloody 33-day war.

"America, great Satan! Israel, enemy of the Muslims!" cried men, women and children in the southern suburbs of Beirut, the main Hezbollah stronghold where the majority of residents are Shiite Muslim.

"America, be warned, do not touch our religion!" yelled the protesters, many of whom carried yellow and green Hezbollah flags, while others waved the flag of Amal, another Shiite movement.

"America, the mother of terrorism," they cried, waving their fists in the air. "We sacrifice ourselves for you, O Mohammed!"

In a televised speech on Sunday, Nasrallah denounced the US-produced film entitled "Innocence of Muslims" describing it as the "worst attack ever on Islam."

"I haven't seen the film, but I know it portrays the Prophet as a bloodthirsty man who only thinks about his desires," said 29-year-old Nabih Ayash, one of the protesters in Beirut.

"I came to heed the Prophet's call... but I waited until an organised protest was staged, so that we do not give a bad image of Muslims."

Violent protests and clashes have broken out since last week, leading to the deaths of 18 people worldwide, including a US ambassador in Libya and three members of the diplomatic corps.

In Lebanon, violent protests in the northern city of Tripoli on Friday led to the killing of one demonstrator and the wounding of 25 others.