My name is Hijrah Hamd. I grew up in the north Georgia mountains and now live in the metro Atlanta area. I learned the 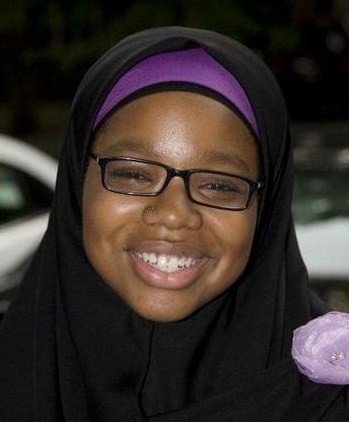 manual alphabet incidentally as a child, and  this knowledge eventually led me to study American Sign Language and interpreting formally after jumping from major to major in college, never finding anything that felt right. I fell in love with the Deaf, Deaf-Blind, and interpreting communities and, in May 2010, graduated with an Associate's Degree in Sign Language Interpreting from Georgia Perimeter College. After being rated by the Educational Interpreter Performance Assessment, I began working full-time as an interpreter in the public school system in March 2011. Additionally, I volunteer and freelance, focusing mainly on interpreting in Islamic settings.

Deaf Muslims and the Deaf community at large are granted very limited access to Islam in this country and around the world. Global Deaf Muslim (GDM) is a non-profit organization working to change this. GDM recognizes that Deaf Muslims have a right and responsibility to learn their religion just as hearing Muslims do, but also realizes they are often not afforded the opportunity. In addition to captioning and original material presented in sign language, interpreters are one avenue of access for the Deaf community. Across the country, there is a dearth of interpreters trained and qualified to work in Islamic settings. The interpreters do not have to necessarily be Muslim themselves, but it is our responsibility to support those in our own community. I believe that ALLAH (swt) has lead me to where I am so that I may be a part of the solution.
GDM's current goal is to produce the Qur'an in American Sign Language (ASL). Though no translation can equal the Qur'an in the original Arabic, Deaf people are not able to able have full access to this aural language. Similarly, English is a second language that can never be accessed completely. An exhaustive interpretation of the Qur'an into ASL would grant hundreds of thousands of people an unparalleled opportunity to understand and grow in this religion. 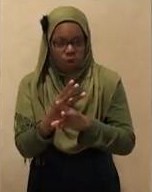 VIDEO BELOW SCROLL DOWN...