Fencer With Headscarf Is a Cut Above the Rest

When Ibtihaj Muhammad fastens her headscarf, or hijab, around her chin, one of its purposes is to deflect unwanted attention. 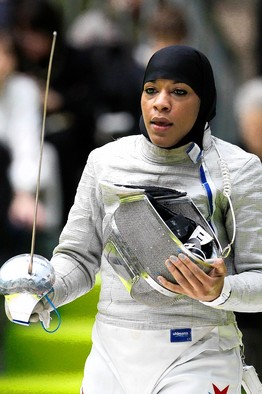 But when she wears a hijab in a sporting arena, it often has the opposite effect.

The New Jersey native is currently ranked 11th in the world in women's sabre, a discipline of fencing. Only one American ranks higher: Mariel Zagunis, the two-time Olympic and world champion.

Both women will compete this weekend at a World Cup fencing event at the New York Athletic Club to earn points toward qualifying for the 2012 London Olympics.

The International Olympic Committee and the U.S. Olympic Committee do not track athletes' religion, but if Muhammad makes the Olympic team, she would likely be the first practicing Muslim woman to represent the U.S. at the Games.

When she competes, photographers often zoom in on the name Muhammad on the back of her fencing jacket. Her mother, Denise, recently saw such a photo and said, "I realized: my God, she's representing all of us.

"You feel the pride. Muslim women are struggling around the world. She's not on the front lines but when she stands up there, she's making her mark for them, for freedom, to have their voices heard."

To make the ultra-selective squad—a maximum of two women per country will compete in sabre in London—Muhammad has been training 30 hours per week at the Fencers Club on West 28th Street in Manhattan and another three to four hours a week with a conditioning coach near her home In Maplewood, N.J.

"I'm one of these people with tunnel vision," said Muhammad, 25. "I'm convinced that I can do anything with enough practice and enough work." 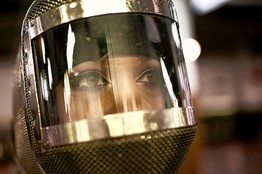 She is the 11th ranked female sabre fencer in the world and the second ranked American. She is trying to earn a spot on the Olympic team that will go to the 2012 Games in London.

Playing sports was a given for the third of five children growing up in an athletic household, but Muhammad always wore long clothing under her volleyball and softball uniforms to conform with Islam's emphasis on modesty.

When Ibtijhaj was 13, her mother drove past the local high school and saw fencers in the cafeteria who were covered from head to toe. Her mother turned to her and said, "I don't know what that is, but when you get to high school, you're doing it."

Then, one day at practice, "Out of this mild young lady came a roar," said her Columbia High School fencing coach, Frank Mustilli. "She got hit, got mad, and under that calm façade was a very aggressive individual."

At 16, she dropped epée for the lightning-quick sabre discipline, which targets everything above the waist (except hands) and allows scoring with the edge of the blade as well as the tip.

At Duke University, Muhammad was a three-time All-America and graduated in 2007 with a double major in international relations and African-American studies (and a minor in Arabic).

Two years later, she began to work with the 2000 U.S. Olympian Akhi Spencer-El in Manhattan.

"It completely changed my fencing," she said. "This is the first time I've ever been taught to fence tactically."

In 2009, Muhammad won the U.S. national title. A year later, she made her first quarterfinal at a World Cup event (losing to Zagunis, 15-8, in Brooklyn, N.Y.). And in November 2010, Muhammad finished 14th in her world championship debut in Paris. All the while, observing her Muslim faith. 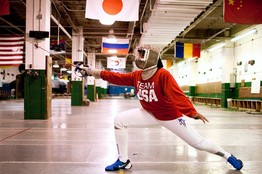 Ibtihaj Muhammad practices her thrusts at the New Jersey Fencing Alliance on Thursday.

Every day, Muhammad prays five times. The fourth prayer, Maghrib, usually coincides with training so she will say it at home later, or pray in a utility room.

Last year, during the holy month of Ramadan when eating and drinking are prohibited from sun-up to sundown, Muhammad woke up at 90-minute intervals in the middle of the night to hydrate during a high-altitude training camp in Colorado Springs. (In 2012, the entire London Olympics will occur within Ramadan.)

But what bothers Muhammad's mother most is the fencing etiquette that entails shaking hands with male referees and seeing her daughter travel without a male guardian.

At airports, fencers are always scrutinized because they carry on bulbous facemasks, metallic jackets and electrical wires. A hijab adds to the questioning. In Belgium this month, Muhammad was told to leave the airport if she did not remove her headscarf.

Her father Eugene, a retired cop, taught her, "The more you [protest], the more you have to take off." Diplomacy eventually prevailed. Usually, Muhammad speaks her mind. She used to be an emotional fencer. Now she is more controlled, but retains her trademark feistiness.

"On the strip, she'll fight for every single touch and not budge," Zagunis said.

But ultimately the referee decides who scored the first touch and, early on, Muhammad sometimes wondered if her minority status affected the outcome of her matches. If so, she figured it had more to do with being African-American than Muslim.

"I have a hard time imagining someone would treat me different based on my faith," she said. "So when I come across anyone being rude to me or anything of that nature, I attribute it to race. I guess that's my first instinct."

Six-time Olympian Peter Westbrook told her, "You cannot allow 'because I'm Muslim' or 'because I'm black' into play in fencing. The minute you put those in, you've lost."

"I have to remember my purpose," she said.

Very few Muslim women have earned Olympic medals since Nawal El Moutawakel of Morocco ran to victory in the 400-meter hurdles in 1984 wearing shorts and a tank top. Muhammad hopes to add to that in hijab.

"I'd love for other minority women and religious minorities [in the U.S.] to believe they can excel in something outside the norm—not just sports, anything where they're breaking the barrier," she said, "and not be deterred by what the image is just because they fall outside that box."