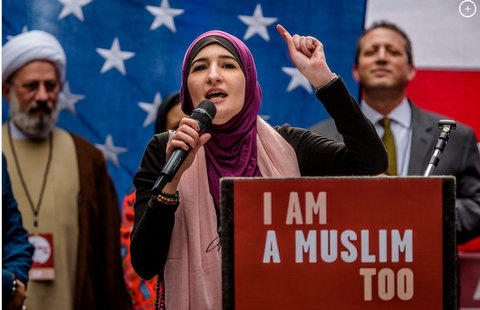 month’s Women’s March on Washington, by a Brooklyn man who wants to “spit in her face,” officials said Tuesday.

“This b---h is in Brooklyn,” the poster, identified on Facebook as Glenn Maccioli, said about Linda Sarsour, a Palestinian-American activist who is also the executive director of the Arab American Association of New York.

“Anyone know where (in Brooklyn)? I would like to spit in her face,” Maccioli posted.

He made the threat in a comment on an article about Sarsour calling President Trump and Israeli Prime Minister Benjamin Netanyahu two “bigoted peas in a hateful pod.”

Sarsour’s comments came during a protest in Washington, D.C., after the two world leaders met Thursday.

Sarsour, 36, was one of the main organizers of the historic march that followed President Trump’s inauguration.

She also created an online crowdfunding campaign to support a historic Jewish cemetery in the St. Louis suburb of University City, where vandals toppled more than 100 headstones over the weekend.

“What kind of sick human being do you have to be to do this?!” she tweeted on Monday.

Maccioli responded to the Netanyahu article after it was posted on the “Bay Ridge Talk” Facebook page on Friday.

After several Facebook posters gave him spots in Bay Ridge for Sarsour’s home and office, Maccioli promised to make good on his threat.

He even invited everyone to watch, stating, “If I get the address I will tell you all where and when. That’s my word.”

Many visitors to the Facebook page from the conservative Brooklyn community shared his views on Sarsour — but none threatened her.

“She should be deported back to hell,” wrote Merill Trilli.

Others were outraged by Maccioli’s comments.

“I am sure he is kidding,” Annie O’Brien posted.

Sarsour reported the posts to police on Friday, fearing that if Maccioli did find her home, he would do harm to her children.

No arrests have been made.

Attempts to reach Sarsour and Maccioli were unsuccessful Tuesday.

In 2014, a man allegedly threatened and threw a trash can at her while she was leaving her workplace.